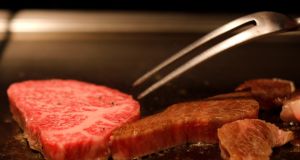 Irish farmers have taken issue with the Mercosur trade deal, with lobby groups saying the beef element of it could cost the Irish meat sector up to €750m annually. Photograph: Jorge Silva/Reuters.

A “red-button” mechanism will be built into the Mercosur trade agreement which would allow farms, regions and even countries to be shut out of the controversial deal if they sell sub-standard products into the European market.

EU sources said action could ensue against producers within 15 days if they do not meet food and feed safety as well as animal and plant health standards.

“If you imagine that one would be able to dump stuff in the market, the answer is no,” a European Commission source said. “They [producers] would be keen to live up to the highest standards because nobody wants to spoil a good market by creating a scare and then they are stigmatised.”

Under the agreement, negotiated over some 20 years, the EU has agreed to except 99,000 tonnes of South American beef into its market each year. The deal also covers other sectors such as pharmaceuticals, services, machinery and other foodstuffs – including the importation of 180,000 tonnes of poultry into the EU and 25,000 tonnes of pig meat.

Irish farmers have taken issue with the deal, which is not due to be formally voted on for at least two years, with lobby groups saying the beef element of it could cost the Irish meat sector up to €750 million annually.

The “red-button” mechanism in the deal would allow the shutting off of a supply from a farm, region or country, the source added. Farms and regions would be vetted and the “red-button would be pushed where there are scares”.

“For someone to export as a third country to the EU, the individual abattoirs and processors must be on our list, so if you are off the list because the producer is found not to be respecting our rules, it is going to be a major challenge to get back on to that list,” the source added.

A provision is also understood to be contained in the soon-to-be published agreement for potential sanctions if the countries involved break their climate change commitments under the Paris Agreement.

Ireland currently exports some €483 million in goods a year to the four Mercosur countries – Argentina, Brazil, Paraguay and Uruguay – with the proposed trade agreement providing for savings on customs duties by eliminating duties on 92 per cent of all tariff lines.

EU agriculture commissioner Phil Hogan said on Wednesday that the new arrangements will not be introduced overnight.

“This beef quota will be implemented over several years, not starting before 2022 and then only over the following five years in annual instalments. In other words, it will be up to 2028 before this deal is fully implemented.”

The deal includes a safeguard clause which can be used if the EU agro-industry is seriously affected by increased imports, and Mr Hogan said €1 billion in financial assistance will be made available for farmers if necessary.

“This is the first time that any such funding has been made available in the context of any trade agreement,” he added.

“Already, Ireland has a €1 billion surplus with Mercosur in traded services and we export nearly €500 million worth of goods to the region. These goods come from companies all over Ireland in sectors that support over 110,000 jobs in Ireland in such areas as chemicals and pharmaceuticals, medical devices and machinery and electrical.”

Mr Hogan said he welcomed the Government’s decision to hold an economic evaluation into the potential impact of the deal on various sectors.