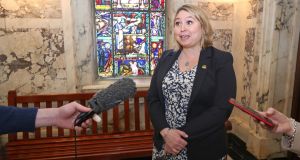 Northern Ireland Secretary Karen Bradley is to meet the North’s political parties today to review progress in the Stormont talks, amid declining hopes of a breakthrough on restoring devolution during the marching season.

Tánaiste and Minister for Foreign Affairs Simon Coveney is in Germany accompanying President Michael D Higgins on a state visit, but has been in close contact with the parties and the British government.

There are still hopes in London and Dublin that a deal to revive the powersharing institutions can be reached before Theresa May stands down as British prime minister, but sources familiar with the state of play concede that the “window is closing”. The talks have been going on for nine weeks now.

No movement is anticipated next week because of the Twelfth of July celebrations, which leaves just one week before the departure of Mrs May – and Ms Bradley, unless she is reappointed – from office.

Sources said a late breakthrough was possible during that week, but stopped short of saying it is likely.

If there is no deal before Mrs May leaves, the talks are likely to be adjourned until September, when a new British government should be in place.

While those involved say the talks have been conducted in a constructive manner, with heavy involvement from Dublin and London, neither Sinn Féin or the DUP has shifted its position sufficiently to allow a breakthrough. However, both governments believe that a deal is possible, if not yet imminent.

“Progress has been made, but there are a number of areas of disagreement between the political parties,” she said, adding that she was doing “everything in my power” to ensure the parties continue to engage.

“They are all still in the room. I will be returning to Northern Ireland straight after questions, to continue talks over the rest of the week. I want the talks to succeed and will do whatever I can to ensure that they do.”

One Dublin source said “there’s been a lot of very, very good work done” and that relations between the DUP and Sinn Féin had improved.

“They are capable of a deal.”

Meanwhile, the British women and equalities minister Penny Mordaunt has said that the House of Commons will step in to change Northern Ireland’s strict laws on abortion if a court rules they are incompatible with individual human rights.

Ms Mordaunt said the Commons Women and Equalities Committee had received “shocking” evidence about the lack of care available to women in the North who are seeking a termination.

“The reason why this hasn’t been dealt with to date is because it is a devolved matter and we take devolution seriously,” she told BBC Radio 4’s Today programme.

“We are expecting a ruling shortly that what is going on in Northern Ireland is incompatible with an individual’s human rights.

At a Tory leadership hustings in Belfast on Tuesday, Boris Johnson and Jeremy Hunt both said they believed the issue should be a matter for the devolved authorities in Northern Ireland. But with the Stormont institutions suspended since the collapse of powersharing in 2017, there is a growing expectation that the North’s abortion law will be changed at Westminster – something that Sinn Féin has lobbied the British government to do.