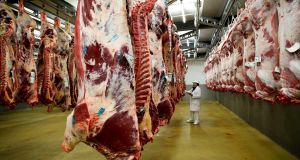 The multi-sector deal includes provision for the import into the EU of 99,000 tonnes of beef from Argentina. Brazil, Paraguay and Uruguay, as well as poultry and pig meat. File photograph: Robert Pratta/Reuters

The Government has rejected opposition claims that it is sending “incredibly mixed signals” in its response to the EU Mercosur trade agreement over its impact on the Irish beef sector.

Minister for Employment Affairs Regina Doherty insisted the Government has been consistent in its message on the deal.

“We welcome the good bits,” of the deal she said and they would work “to negate the bad bits” of the agreement, which she stressed was only the start of a long process.

She insisted that all Government Ministers were playing on “Team Ireland”.

Ms Doherty in turn accused Fianna Fáil deputy leader Dara Calleary of “playing the man” when he asked if Ireland’s EU Commissioner Phil Hogan was on Team Ireland of if he was the “cheerleader” for the deal.

The multi-sector deal includes provision for the import into the EU of 99,000 tonnes of beef from Argentina. Brazil, Paraguay and Uruguay, as well as poultry and pig meat.

Amid internal Fine Gael grumblings about Mr Hogan’s future as EU Commissioner, Mr Calleary accused Government Ministers of trying to “make a scapegoat” of Mr Hogan over the failure to protect the beef sector.

He said there were “more Fine Gael tanks being placed on Commissioner Hogan’s lawn than in Washington” in reference to the US July 4th military display.

Ms Doherty said the Government was consistent in its message and would defend all Irish farmers.

She told Mr Calleary “you are playing the man rather than dealing with the issue”.

She said that the deal, which took 20 years to agree, was only at the start of a long process of finalisation.

She also said that Mr Hogan, a former Fine Gael cabinet minister, would have a role in that process in the coming years.