Miriam Lord: Laughing Taoiseach admits his fan mail days are behind him 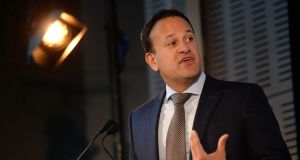 A laughing Leo Varadkar, hands up in mock horror, stressed in the Dáil that his fan mail days were behind him. Photograph: Dara Mac Donaill

Dark memories of Kylie Minogue swept across Leo Varadkar’s mind and he was suddenly afraid.

The Taoiseach paused, stopped in his tracks by thoughts of that breathlessly penned “Dear Kylie” note last year when he told the Aussie superstar he was a “huge fan!” and was really looking forward to seeing her in concert, and could he welcome her to Ireland personally as his office is right across the road from her hotel?

He got dog’s abuse for doing that.

Tina Turner turned up in the Dáil on Wednesday. There was no advance notice so no opportunity of a fanboy repeat for Leo.

She surfaced during the long tributes to former Fianna Fáil TD for Galway West, Mark Killilea, who died in December.

In fairness, this was not expected.

The Leas Ceann Comhairle, Pat ‘the Cope’ Gallagher, was a great pal of the politician, who was a deputy back in the late 1970s and early 1980s before becoming a senator and then a long serving MEP.

Pat remembered being on the election trail with “Markeen” in 1994 along with the music blaring from the campaign bus.

“And when I go west of Ireland I still hear Tina Turner in my ear, singing ‘Simply the Best’. He felt he was simply the best and it was an exciting campaign.”

The Taoiseach was 11 months old on the day Killilea first entered the Dáil, but he paid a warm tribute on behalf of his party to a fellow politician who was respected on all sides.

“I didn’t have the privilege ever to meet Mark Killilea but I am delighted to learn today that we both shared a love of Tina Turner,” he began, before hurriedly adding: “but I’m happy to inform the House that we’re not currently in correspondence.”

A laughing Leo, hands up in mock horror, stressed his fan mail days were behind him.

Don’t mind them. Crack on, Taoiseach. Tina is fab too.

Labour leader Brendan Howlin recalled Killilea was in the thick of things during the turbulent Haughey era.

To be honest Elaine, I think this reflects more on the Taoiseach than anyone else. https://t.co/BjFH1qC1dk

“I suppose most political commentators remember the very odd . . . ,” he began, about to elaborate on those colourful days when he was struck by a thought: “You see, this Dáil – people think it’s very bizarre but it’s calm in comparison to the Dáil during that era.”

So bizarre and boring are interchangeable words now.

He looked back to the time Killilea was a junior minister for posts and telegraphs, when people often had to wait years to get a phone line into their home. They made representations to their local TDs in case they could influence the process. Howlin was told Markeen always kept a number of the old-fashioned handsets in his car and gave them to constituents.

“They would still have to wait two years for the connection, but it would give them hope.”

Meanwhile, the needle between the Taoiseach and leader of the main Opposition party continued to fester nicely.

The flashpoint for Wednesday’s squabble was the Dunkettle roundabout.

This legendary traffic interchange on the road to Cork city is earmarked for an upgrade under the government’s much vaunted Project 2040 plan. But nothing much is happening and local man Micheál Martin is keen to find out why.

He asked the Taoiseach to explain the delay, elaborate on the rumours of major cost overruns and say when construction will begin.

The Taoiseach snippily remarked he was glad the Fianna Fáil leader supports the project because his spokespeople think some of the road projects should be reviewed.

Well then, deflected Leo, apropos of nothing Micheál was asking, what projects do you want reviewed?

He was told to stop being silly. People want to know when Dunkettle roundabout will be finished.

“They want to know if you’re going to cancel the roads programme,” niggled the Taoiseach, inadvertently intimating that Fianna Fáil might be back in government soon.

“They don’t want to know about the rest of the roads,” groaned an exasperated Micheál. “They don’t believe in that silly carry-on. It’s just your press office on steroids.”

The bickering continued later when the pair were at odds again over the funding and future of major projects, including Dunkettle. The Fianna Fáil leader asked for a response which wasn’t “petty, silly and idiotic”.

Leo, just back from rubbing shoulders in Brussels with fellow European prime ministers, was in a truculent mood. Probably finding it difficult to be back among the domestic plodders having soared with political giants.

One day being spoken of as a compromise candidate for president of the European Commission (flattered but not at the moment), the next dealing with Dáil accusations over housing, the minimum wage and a traffic intersection in Cork.

No wonder he was a bit short with the locals.

“Hold me coat!” says Leo, before he floors everyone with his strange reaction.

“It kinda reminds me of one of those parish priests who preaches from the altar telling us to avoid sin while secretly going behind the altar engaging in any amount of sin himself.”

Whoa! What did he just say?

In the chamber, Micheál Martin was speechless.

Elaine Loughlin of the Irish Examiner quickly tweeted the comment.

“To be honest Elaine, I think this reflects more on the Taoiseach than anyone else,” he sadly concluded.

Meanwhile, Michael Creed is cracking on with his plan to “thwart” the beef element of the Mercosur trade deal. With Irish farmers up in arms over the draft agreement, the Minister for Agriculture is vocally championing their cause.

It’ll be no pantomime and it’s going to run for years, but Creed intends to ride to the rescue of beef farmers and scupper those aspects of the plan which are damaging to beef farmers by using a variety of disruptive tactics.