Number of refugees rescued by the navy fell from 7,029 to 1,888 after a change in policy 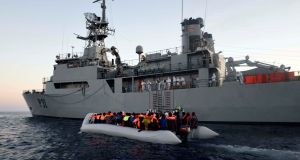 The LÉ Eithne in the Mediterranean. Photograph: Irish Defence Forces

The number of refugees Irish Naval Service vessels rescued in humanitarian operations fell from 7,029 in 2016 to 1,888 last year, after a change in policy to focus on security operations targeting smugglers and a drop in the number of people attempting to cross the Mediterranean sea.

In July 2017, the Government received approval to join the EU’s Operation Sophia, as part of the EUnavforMed (EU Naval Force in the Mediterranean). Previously the Irish navy’s search and rescue work at sea was carried out as part of a bilateral agreement with Italy called Operation Pontus.

Up to July, 1,187 people trying to cross the Mediterranean were rescued by the Irish navy vessel LÉ Eithne, according to figures on Operation Pontus from the Department of Defence, with 701 rescued over the second half of the year.

During the first year of Irish search-and-rescue sea operations in 2015, 8,592 refugees were rescued between May and the end of the year.

The Department of Defence said the drop was due to a “significant fall” of around 50 per cent in the number of people attempting to cross the central Mediterranean Sea route last year.

The focus of Operation Sophia, which includes Ireland and 26 other EU states, is to target and disrupt smuggling networks in the Mediterranean Sea. Sam Taylor, director of Médecins Sans Frontières (MSF) in Ireland, said the move away from humanitarian search-and-rescue work was “concerning”.