Abortion poll findings dramatic but attitude change has been gradual 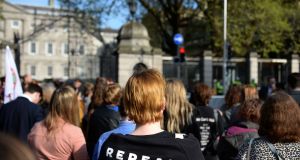 Today’s Irish Times/Ipsos MRBI poll shows, 65 per cent of Irish voters who expressed a preference are in favour of and 35 per cent against repealing the Eighth Amendment if the proposition is to provide abortion on request up to 12 weeks.

These findings represent, on the face of it, a dramatic change in attitudes to abortion on request in Ireland. However, attitudes towards something as personal as abortion change gradually, never dramatically, so voters must also be reacting to a change in the proposition.

Context is also hugely important to understanding today’s poll findings. Voters who are not satisfied with the current situation may be concerned about squandering a once-in-a-generation opportunity to make a change.

Certainly, there has been a softening of attitudes towards abortion, driven in part by outputs from the Citizens’ Assembly and the Oireachtas Committee on the Eighth Amendment. Both groupings came down in favour of making abortion more widely available in Ireland having listened to and considered expert opinion and arguments on both sides.

Voters have been paying attention to the debate. A very significant 19 per cent of voters in today’s poll agree to having become more open to the idea of abortion being more widely available in Ireland, compared to just 3 per cent who have become less open.

While voters are against making abortion without any restrictions legal, they are more liberal when asked to view the issue from someone else’s perspective. The Irish Times/Ipsos MRBI poll from February 2013 showed 61 per cent agreeing with the statement – “abortion is a woman’s right to choose”.

Compromise means not getting everything you want and large cohort of those in favour of providing abortion up to 12 weeks are naturally not entirely comfortable with the proposition. A sizeable majority (72 per cent) of those in favour of repealing and legislating for abortion agreed with the statement – “I have reservations about providing abortion on request up to 12 weeks but also feel it is a reasonable compromise and will be an improvement on the current situation”.

In the first divorce referendum in 1986, an early majority in favour (57 per cent – Irish Times/Ipsos MRBI Poll, April 1986) morphed into a majority against when the result was announced.

Public opinion in the second divorce referendum in 1995 followed a similar trajectory. A strong majority in favour (63 per cent – Irish Times/Ipsos MRBI Poll, February 1995) at the start of the campaign turned into the narrowest of victories on the day.

Voting intentions tend to move in only one direction once referendum campaigns on social issues begin. Maybe it will be different this time around.