Taoiseach and new British prime minister have yet to officially speak 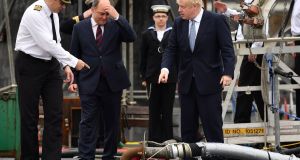 Contact has been made at an official level between the Government and Downing Street to arrange a conversation between Taoiseach Leo Varadkar and British prime minister Boris Johnson.

The two have yet to officially speak despite the fact that Mr Johnson took up the role last week.

A spokesman for Mr Varadkar said “there has been contact at official level and it’s expected that the Taoiseach and the PM will speak in the near future.”

A senior source said it was “no big deal” that a telephone conversation had not happened yet and indicated that the Department of Taoiseach was not concerned at the delay.

A conversation will take place “at some stage this week”, the source added.

In recent times incoming UK prime ministers have placed a call with their Irish counterpart on the first day of assuming office.

There have been heightened tensions between the UK and Irish governments over Brexit since Mr Johnson’s appointment five days ago.

On a visit to the Trident nuclear base in Scotland on Monday, Mr Johnson said there was “ample scope” to achieve a new deal.

He said: “We are not aiming for a no-deal Brexit at all. What we want is to get a deal and I’ve had some interesting conversations with our European partners. I’ve talked to Jean-Claude [Juncker] and Angela Merkel and we’re reaching out today to Leo Varadkar. The feeling is, yes there’s no change in their position, but it’s very, very positive.”

“I would judge that it is highly discourteous that the new prime minister Boris Johnson is not engaging with the Taoiseach,” she said.

“That is highly offensive given the disastrous impact of Brexit on the island of Ireland.”

Ms O’Neill said Mr Smith did not offer an explanation as to why there had been no contact between the prime ministers. She said it was not up to her who made the first move in initiating a conversation.

“Whoever phones who first, the issue that needs to be discussed are the implications, the catastrophic implications for the island of Ireland so I think whenever the Taoiseach and Boris Johnson speak at some stage I think the message will be very, very clear from An Taoiseach – which will be around Brexit, the need to protect the Good Friday Agreement, it will be around the fact the withdrawal agreement needs to be adhered to and agreed because this is what the British government negotiated themselves a short time ago,” she said.

Former taoiseach John Bruton said on Monday that a phone call would not make a difference.

“We all know what Boris Johnson is saying from the airwaves, he wouldn’t say anything different in a phone call. His interest is focused on elections in Britain and outmanoeuvering [Nigel] Farage,” Mr Bruton said.

“We’ve got to face the fact that on October 31st the likelihood is that Britain will be out of the European Union without a deal. As a result of that we, as an EU member, will have to impose border checks particularly in regard to food and agricultural imports because once Britain is out of the EU we have no guarantee of the standards of whatever they might be exporting to Ireland, across the Border or across the Irish Sea and we will have to check that it complies with EU standards as a full member of the single market.

“Being a member of the single market has brought us huge amounts of foreign direct investment so we’ve got to preserve that.”