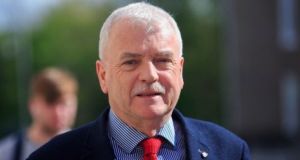 Minister of State in the Department of Health Finian McGrath was among a handful of Ministers to call for the situation to be examined. Photograph: Gareth Chaney/ Collins

The debate around reducing the two-metre rule for social distancing was sparked after a lengthy Cabinet meeting last week, but senior Ministers have admitted they are perplexed at the way the issue has gathered momentum.

Last Friday, the Cabinet discussed, over a number of hours, the Government’s response to the Covid-19 pandemic. The topics covered were extensive.

Taoiseach Leo Varadkar gave a detailed presentation on the progression of the disease and on the public compliance with lockdown measures during the continuing first phase of restrictions.

He also spoke about how the Health and Safety Authority (HSA) was navigating the return-to-work plans, and then told Ministers that it was the view of the Policing Authority that the public were broadly supportive of the gardaí’s use of new powers.

Minister for Health Simon Harris spoke at length about testing capacity, the current deal with private hospitals, and the development of the contact tracing app.

The meat of the discussion was around travel restrictions and making it mandatory for passengers arriving into Ireland to tell the State where they would be for the next 14 days.

Making the isolation period itself mandatory was the tricky part – Ministers voiced concerns that the move could have bigger consequences for the economy. As part of this discussion, it was noted that other countries were instructing citizens to stay one metre apart instead of two. It is understood that Minister of State in the Department of Health Finian McGrath was among a handful of Ministers to call for the situation to be examined.

Reports emerged that there was a heated discussion on the issue that took centre stage. Yet a number of senior Ministers say this did not happen.

On Friday night, after the issue was reported in various media outlets, one Minister said privately that the conversation on the topic was short and did not leave any kind of lasting impression.

Another Minister, when asked if it had been a major talking point, said: “God, no.” Another said they were “merely curious” about why the advice might be different across European countries.

But within hours both Fianna Fáil and the Labour Party were calling for clarity, and industry figures such as Adrian Cummins of the Restaurants Association of Ireland was saying it could be a “game-changer”.

In an apparent effort to keep the Government’s message on track, the Taoiseach issued a statement through his spokesman on Saturday morning.

He said there was no change to the advice to maintain a physical distance of two metres.

Government sources say the debate could prove to be unhelpful because people may engage in “anticipatory behaviour” and behave less cautiously around others as a consequence.

On Sunday, HSE chief clinical officer Dr Colm Henry said the two-metre distance rule was based on the projected distance that a droplet containing the virus can spread to another person through coughing and sneezing.

The decision to maintain a two-metre distance was the reason, he said, why the reproduction rate in the speed of the virus had fallen to the point where it is now suppressed.

Infectious diseases expert Prof Sam McConkey said changing the advice could “lead to more transmission of Covid-19” and that a one-metre limit could result in “up to four times more transmission”.

The issue was one of the main topics raised between Ministers and chief medical officer Tony Holohan on Thursday, putting the issue front and centre, more by accident than design.

Mr Holohan’s judgment on the issue was clear: there would be no immediate change to the two-metre rule because such a move could increase the risk of infection.