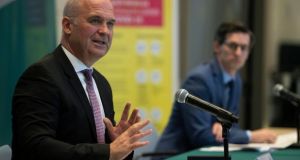 Chief medical officer Dr Tony Holohan held a meeting with the Cabinet on Tuesday afternoon where the issue was raised by a number of ministers. File photograph: Colin Keegan, Collins Dublin

The death toll from the Covid-19 pandemic rose by a further 17 to 1,631 on Wednesday as the Department of Health reported a further 73 confirmed cases of the disease.

The National Public Health Emergency Team (NPHET) said there have been 24,803 confirmed cases of the coronavirus disease in the State.

Two further coronavirus-related deaths were reported in Northern Ireland on Wednesday, bringing the total number of fatalities in the North to 516.

“We are a bit worried about that,” he said at the department’s daily briefing on Covid-19. Asked whether this might lead to Nphet delaying the introduction of the second wave of lockdown relaxations planned for June 8th, Dr Holohan said: “Not on its own.”

He was “not going to call it a trend”, he said, because it was an “evolving situation” and he would watch ICU admissions and hospitalisations on a daily basis over the coming week.

“If we see a change in numbers that we're not anticipating, that we can't explain or by reason of increased infection, we might have to recommend measures,” Dr Holohan said.

The State’s chief medic said that he told Government ministers at a meeting of Cabinet earlier on Wednesday that there would be no change to the current two-metre rule for physical distancing.

This is despite calls for it to be relaxed to one metre to allow more public and business activity on the basis that some international experts say one metre sufficiently protects against the virus.

“It is a reasonable interpretation of the evidence, and a precautionary approach to its application, and we think it's the right measure for now,” he said.

Dr Holohan provided new data on recovery rates from the disease, showing that almost 82 per cent of cases in the community had recovered, while 8.1 per cent of hospitalised people had been discharged alive, giving a total rate of 89.7 per cent. This was up from 70 per cent a month ago.

Some 93 per cent of infected healthcare workers had recovered, he said. On the Covid-19 clusters in meat plants, the State’s deputy chief medical officer Dr Ronan Glynn said that there were outbreaks in 19 plants, an increase of three on a week earlier, and that 19 of the 925 infected workers at the plants had been hospitalised.

Dr Holohan was asked whether he thought it was accurate for Ryanair chief executive Michael O’Leary to say that the State’s mandatory 14-day quarantine for travellers entering the country - that comes into effect today - had no basis in health measures or science. “No,” he replied.

He also rejected Mr O’Leary’s view that Ireland had one of the strictest lockdowns in Europe.

Dr Holohan presented a slide that showed that three of the 17 reported deaths took place on Monday, a day when no reported deaths was praised by the Taoiseach as a “significant milestone”. Dr Holohan said that some of the nine deaths reported on Tuesday also occurred on Monday.

Nphet would not bring forward relaxations such as for weddings because it had to mindful that they could lead to the spread of infection, he said. “The nature of the activity that happens there is sustained, usually indoor, contact between people with usually - and the reality of this country is - quite a substantial amount of consumption of alcohol and everything that goes with that,” he said.

Detailed data from the Health Protection Surveillance Centre (HSPC) as of midnight on Monday (relating to 24,730 cases) shows 57 per cent are female and 43 per cent are male with the median age of confirmed cases being 48 years.

A total of 3,251 cases (13 per cent) have been hospitalised and of those, 399 cases were admitted to ICU. Cases associated with healthcare workers now number 7,891.

The @hpscireland has today been informed that a total of 17 people with COVID-19 have died.

There have now been a total 1,631 COVID-19 related deaths in Ireland*.@roinnslainte @HSELive #COVID19ireland #COVID19

And of those for whom transmission status is known, community transmission accounts for 40 per cent close contact for 58 per cent and travel abroad 2 per cent.

Dr Siobhán Kennelly, HSE national clinical advisor and group lead for older persons said, “Covid-19 is having an impact on everyone in Ireland. We understand that as the country reopens in phases, people may be anxious. If we all maintain social distance, wash our hands well and often and know when to self-isolate, together we will keep this virus suppressed.”

Earlier, Dr Holohan told ministers that there will be no immediate change to the current two-metre rule for physical distancing.

Dr Holohan held a meeting with the Cabinet on Wednesday afternoon where the issue was raised by a number of ministers.

One source said that Dr Holohan indicated there would no imminent change to the requirement as it was a risk assessment that was necessary in order to suppress the spread of Covid-19.

Ministers were told that reducing the two metres to one metre could increase the risk of infection.

Many businesses have said that they will be unable to reopen unless the social distancing guide of two metres is reduced to one metre.

Speaking in the Dáil today, Taoiseach Leo Varadkar suggested that the Covid-19 committee could examine the two-metre issue and come up with a recommendation.

“I am not sure if it is possible to get a political consensus on the one metre or two metre guidance, or the two-hour close contact rule. If there is a place to do that, it probably is the Covid committee which has been established.

“The committee seems to be working well and is very representative of the Dáil. I do not think it is something for the party leaders, to be honest.

“The right place to do that is the Covid committee. It can hear the evidence and then make a recommendation to the Government on the one-metre or two-metre rule and the two-hour contact tracing rule. It might be the best form for political consensus to be found, if it can be found.

“I am not sure, however, if it can. In the meantime, we will follow the advice of the public health emergency team.” Dr Holohan is the chairman of the National Public Health Emergency Team (NPHET).

Mr Varadkar continued: “It has to be seen in its overall context, however, namely, how prevalent the virus is in the community.”

He added that “we need to bear in mind that, while there is no such thing as zero risk from this virus, as the risk reduces, then rules can be relaxed. That is what the plan is all about in many ways.”

Mr Varadkar was responding to Social Democrats TD Catherine Murphy who said “the confusion in relation to the expert advice is a real problem” on the two-metre rule.

She warned that the public are now starting to move ahead of the decisions that are being made and “there is a darkening of the mood”.

Ms Murphy warned that “if you’re going to bring people along with you, you have to be in sympathy with them. I feel we’re out of step with the public mood.”

Minister for Health Simon Harris also insisted “we will be guided by public health advice”. He said there was 99 per cent protection from infection at two metres.

He acknowledged that “it would be hard to get your hair cut from two metres but the general advice is to follow the two metres as much as possible”.

Fianna Fail leader Micheal Martin also warned that the restrictions will lose public support if they are no longer seen as actually being based on clear scientific evidence.

He said the two-metre social distancing regulation was not required by the science.

“It has been helpful but it cannot be allowed to block Ireland restarting activity which is already underway elsewhere without a negative impact,” he said.

“If it is true that our capacity to rapidly test, trace and isolate is now in place, then we need to see this reflected in the loosening of policies put in place in part because we lacked this capacity.”

Mr Martin also criticised the five kilometre limit on how far people were allotted to travel for exercise and said there was no remaining “serious justification” for this.

“The public health concern is how people behave around others - not how far they are from their home.”

He added that research showed it could be forcing people in urban areas into more crowded situations.

In phase two of the Government’s roadmap for opening the economy on June 8th, travel will be allowed up to 20 kilometres but Mr Martin did not see any logic or scientific basis for this either.

And he believed the distinctions between the shops allowed to open is “arbitrary at best”. Supermarkets were open throughout the crisis and data suggested they did not play a role in spreading the virus.

Mr Martin stressed that “the overriding need now is to move to a situation where the focus is put on showing people how to behave once most activity is restored”.

He said that people had concluded that “announcements are being delayed rather than made as soon as they are justified”.

Mr Martin warned that the restrictions will lose public support if they are no longer seen as actually being based on clear scientific evidence.

Mr Varadkar told him that elements of the roadmap could be accelerated, “could be brought forward but I really would ask the public and ask the House to hold firm for now”.

He said “we’re only in phase one and one of the reasons it’s a three-week phase is so that we can have proper data”.

Referring to comments by Ryanair’s Michael O’Leary, Mr Varadkar said: “I heard a call from a prominent person this morning saying that flying was entirely safe for example.

“I think we have to continue to base our decisions evidence.”

He added: “We won’t really know what effect the easing of the restrictions has had for about two weeks so if we see that the numbers are still going very much in the right direction in the first week in June that can give us an assurance that we could accelerate some of things in the plan.”