France bans use of hydroxychloroquine to treat Covid-19 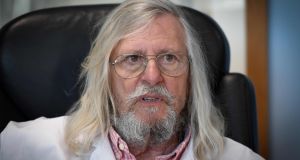 Prof Didier Raoult, who has been prescribing hydroxychloroquine to Covid-19 patients for several months, attacked the Lancet study on its use as “a completely delirious fantasy”. Photograph: Gerard Julien/AFP

France on Wednesday banned physicians from prescribing hydroxychloroquine for the treatment of Covid-19, five days after the British medical journal the Lancet published a study that concluded the drug does not cure the disease and appears to cause side effects associated with a higher fatality rate.

US president Donald Trump said on Sunday that he had “finished, just finished” a two-week course of the the unproven treatment, which has been promoted by Prof Didier Raoult, the controversial founder and director of the Mediterranean infectious and tropical disease institute in Marseille.

Trump has tested negative for the disease, but said he took hydroxychloroquine because two White House employees tested positive.

Brazilian president Jair Bolsonaro, “the Trump of the tropics”, has also vaunted the alleged benefits of hydroxychloroquine.

The French Journal Officiel on Wednesday published a decree annulling previous texts that allowed doctors to prescribe hydroxychloroquine for Covid-19 patients on grounds of compassion or or for clinical tests.

The High Council for Public Health (HCSP) said that based on numerous studies, hydroxychloroquine “should not be used, in isolation or in association with a macrolide antibiotic, for the treatment of Covid-19 patients, whether outpatients or hospitalised, whatever the level of infection”.

Raoult has been prescribing hydroxychloroquine to Covid-19 patients for several months. It is usually used against malaria, lupus and rheumatoid arthritis. Raoult combines it with azithromycin, an antibiotic effective against bacterial pneumonia.

The French agency for the security of medicines and health products, ANSM, called on Wednesday for an end to all clinical tests of the drug in France, including a European project called Discovery. Britain is continuing its hydroxychloroquine trial, Recovery, Le Monde reported.

On Monday, the World Health Organisation announced that in light of the findings published in the Lancet, it was suspending participation of patients on hydroxychloroquine in an international drug trial called Solidarity.

“The WHO isn’t about science,” Raoult said. His comments on the pandemic have been similar in spirit to those of Trump. “The world has gone completely mad,” Raoult said on January 21st. “Three Chinese died and the WHO gets involved in a global alert.”

Covid-19 “is probably the easiest respiratory infection to treat”, Raoult said on February 25th. More than 350,000 people have now died of the disease throughout the world.

Raoult attacked the Lancet study in his weekly video press conference on Monday. It was, he said, “a completely delirious fantasy. How do you expect this crappy study done with big data to change what we have seen . . . I won’t change my mind, because I know the reality.”

The Lancet studied 96,032 cases from 671 hospitals on six continents. It considered only patients who had started treatment with chloroquine, hydroxychloroquine, or a combination of those drugs with antibiotics, within 48 hours of testing positive for Covid-19. It compared their cases with those of 81,000 patients who did not receive those medicines.

The mortality rate in the group that received none of the medicines promoted by Raoult was 9.3 per cent, or one in 11 patients. It ranged as high as 23 per cent for those receiving hydroxychloroquine and antibiotics.

The higher death rate was attributed to cardiac arrhythmia, a side-effect of hydroxychloroquine. Raoult had excluded all patients at risk of arrhythmia from his smaller-scale test.

Earlier studies published by the New England Journal of Medicine, the Journal of the American Medical Association and the British Medical Journal came to conclusions similar to those of the Lancet. All were “observational,” that is to say based after the fact on patients’ files, not closely observed clinical tests with a control group.

“Marseille and the world with Professor Raoult,” says a large banner that was hung outside the virologist’s institute by supporters of the Olympique Marseille football team. Raoult has posted videos of demonstrations of support by Marseille rubbish collectors, taxi and ambulance drivers on his Twitter account.

Marseille restaurant owner Ugo Palvini flaunts a Raoult tattoo. “For me, Didier Raoult is a sort of homegrown Che Guevara who stands up to the government and the big money machine that gets in the way of public health,” he told Libération.