From musical ties to Santa permits the Dáil was alive to new political ideas this week. Video: Oireachtas TV 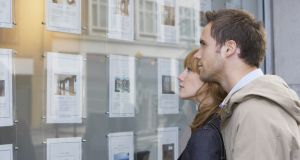 A large share of the electorate is probably thinking that landlords – no matter what their circumstances – have never had things better and shouldn’t be given any sort of raise for a few years. Photograph: Getty Images

On Tuesday afternoon in the Dáil, Micheál Martin closed the buttons on his jacket and shivered.

“It seems to be extraordinarily cold and chilly in this chamber,” he complained to the Leas Ceann Comhairle.

He wasn’t wrong. It was perishing in the place. Some female TDs were so swaddled in woollen shawls they would have been alright in a Peig Sayers lookalike contest.

“It’s becoming a hardship post in the last week leading up to Christmas,” he told the chair. “Although maybe you don’t want the temperature to rise too much. I can appreciate that.”

The following day, the Government duly obliged him on the heat front.

Simon Coveney, egged on by Enda Kenny, turned the thermostat to “high” on their minority partners and Fianna Fáil began to perspire.

And their party leader, who looked none too happy by lunchtime, must have been pondering that old Chinese proverb: “Be careful what you wish for.”

Is the agreement between the two main parties based on confidence and supply, or an eye for an eye?

The latest incendiary issue between them centred on the Government’s plans to curb soaring rents in the private rental sector. Simon Coveney, the Minister for Housing, presented his proposals on Tuesday as a fait accompli, apparently so he could rush his Bill through the Oireachtas to prevent landlords jacking up their prices before it became law.

That put Fianna Fáil noses out of joint immediately. The party expects to be consulted on all major decisions of importance to their electoral prospects, sorry, to the country. Furthermore, Coveney, in act of gross impertinence, didn’t factor any opportunity for a Fine Gael climbdown into his Bill.

Coveney faced him down. He put a tight time deadline on the Dáil shelf life of his Bill and vowed to kill it stone dead if Fianna Fáil insisted on changes.

That deadline was yesterday morning. After talks between the parties failed overnight.

Cowen, and Fianna Fáil couldn’t stand the heat. 48 hours after feeling the chill, Martin and his party threw in the towel.

There were rowdy scenes in the Dáil.

At 10am, the chief whip came in and proposed a new timetable for the day. The Planning and Housing Bill was glaringly missing.

The Opposition howled. Brendan Howlin wanted to amend Regina Doherty’s new order and restore the original, so they could vigorously oppose it. The proposal was defeated because Fianna Fáil supported the Bill they were screaming blue murder about.

Meanwhile, Coveney raced in to say he wasn’t presenting a Government Bill to the Dáil “if I don’t know what the outcome is going to be”.

Martin, waved the white flag and proposed suspending proceedings for a solution could be found.

He knew Coveney wasn’t going to give in to Cowen’s demands and didn’t want his party blamed for derailing important legislation.

Gerry Adams rushed in amid the roaring, having missed everything, but determined to get his tuppenceworth of action. Too late, said Pat the Cope Gallagher in the chair. The two men conducted a long argument in Irish, before Adams, abandoning his Erse, bellowed: “New politics me arse.”

“What did he say?” asked a scandalised Pat the Cope, failing to live up to his name.

“Ah, no” sighed Pat the Cope, sadly, in his soft Donegal voice.

The Fine Gaelers were in great form. Since the formation of government, they’ve felt constantly undermined by Fianna Fáil. When bruiser Barry was sent to confront Simon, they feared he might give in under the strain.

“Enda told him to do no such thing. To stick to his guns. Enda put the steel in Simon’s spine” declared one backbencher. That may be true, or the man could also be supporting Leo Varadkar in the leadership stakes and talking down his main rival.

Coveney had been talking tough well in advance of Enda’s galvanising performance at a parliamentary party meeting, informing people at lunchtime that he would pull his Bill rather than water it down.

When Regina rejigged the timetable again to include the Housing Bill, Fine Gael TDs were cock-a-hoop. Across the floor, their Fianna Fáil partners were very subdued.

Christmas back on the menu

Not to be outdone, Sinn Féin’s Mary Lou McDonald came over all festive. She wished the Tánaiste the season’s best, extending her good wishes to “the elves and gnomes of Fianna Fáil”. The Sinn Féin benches dissolved into hysterics.

Or the Government’s “little helpers” as she also described the darkly sulking FFers, who failed to create disharmony in Enda’s grotto.

“You never know, you could get a little bit of mistletoe and kiss and make up,” she told them.

Howlin got in on the act, wishing everyone a happy and restful yuletide “as we reinvigorate ourselves.”

Others might have said “as we go off to get buckled”. But not Brendan.

Fine Gael’s Jim Daly asked if the Government is granting Santa his permit to travel through Irish airspace and whether Fianna Fáil had an agreed position on the proposal, perhaps asking to have it watered down. This “would result in partial delivery” to Irish households on the big night.

The Tánaiste assured him everything is in order and there were no objections.

At which point, Sinn Féin’s Aonghus Ó Snodaigh decided to talk about asbestos which was found in the old RTÉ studio in Leinster House, but he was interrupted by his Christmassy tie, which burst into a medley of Christmas carols. He spoke to the tinny accompaniment of Jingle Bells, We Wish You a Merry Christmas and Santa Claus is coming to town.

Afterwards, Jim Daly, overjoyed that Santa is cleared for Irish airspace, admired the tie. Aonghus gave it to him for Christmas.

So. A happy ending, of sorts. Enda is happy. Simon is happy. Leo not so happy. Fine Gael is triumphant. The Shinners are delirious, what with the fun in the chamber and then Eoin Ó Broin discovering a drafting error in the contentious Bill.

But Fianna Fáil are not happy. They don’t like being bested.

They could still win in the long term, though. Renters outside Dublin and Cork will remember their stand on their behalf, and while Fine Gael may argue that a 4 per cent per annum rent cap is necessary, a large share of the electorate is probably thinking that landlords – no matter what their circumstances – have never had things better and shouldn’t be given any sort of raise for a few years.

This entertaining pre-Christmas episode may be over, but the story doesn’t end here. The consequences for this tit-for-tat Coalition could be major.

1 Ireland among countries urged to consider reinstating restrictions
2 Sinn Féin apologises as member resigns over social media abuse
3 Trump evacuated from briefing after shooting near White House
4 ‘We feel we are in limbo’: Wedding plans in chaos due to Covid-19
5 O’Doherty ‘trying to evade’ service of defamation proceedings, court hears
Real news has value SUBSCRIBE