Over 4,500 submissions on abortion made to Citizens’ Assembly

Both sides of the debate on Eighth Amendment are represented 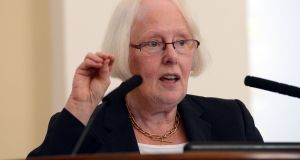 Supreme Court Judge Mary Laffoy: the assembly she is chairing will make a report to Government by the end of June of next year. Photograph: Alan Betson

The Citizens’ Assembly has received more than 4,500 submissions on the future of the Eighth Amendment to the Constitution, which underpins Ireland’s strict ban on abortion, with more expected today before the deadline for submissions expires at 5pm.

The assembly, which is comprised of 99 citizens and is chaired by Supreme Court Judge Mary Laffoy, is discussing the future of the amendment and will make a report to Government by the end of June of next year.

It invited submissions on the amendment, which was inserted into the Constitution as article 40.3.3 and guarantees the equal right to life of the foetus and the mother, to aid its discussions which will recommence on January 7th. The assembly began its work on the amendment at a two-day meeting in late November.

Prominent organisations on both sides of the abortion debate have made submissions, as well as large number of individual citizens.

The assembly says it will publish all submissions made to it, though in the case of personal stories or sensitive submissions, personal data and related identifiable details can be removed on request.

Submissions can be made online at www.citizensassembly.ie or delivered to the offices of the assembly at 16 Parnell Square, Dublin 1 by Friday, December 16th.