Success of rent cap policy is what matters, not political win 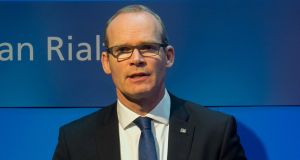 Within Government and especially within his own party, Simon Coveney’s stock has soared. Photograph: Gareth Chaney Collins

In the end, they didn’t even bother stringing it out for the added drama.

After a morning of procedural rows in the Dáil, word filtered out yesterday afternoon that Fine Gael and Fianna Fáil had reached an agreement on a package of measures to help control rising rents.

The nature of the agreement was attested to by the jauntiness of Fine Gaelers and the glum faces of Fianna Fáilers. Minister for Housing Simon Coveney got his way on the great majority of issues and Fianna Fáil – faced with the prospect of taking the blame for letting the entire package fall – gave way.

Fianna Fáil’s housing spokesman Barry Cowen – who has led for the party in muscular fashion on the issue – claimed to have won concessions, and he did get some. But nothing like what he wanted, and Cowen and his party had to swallow the fact that having afforded them only minimal consultation, Coveney got his way, and did so very publicly.

The summary of yesterday’s business at Leinster House: Fianna Fáil backed down, Fine Gael got its way.

Needless to say, much is being read into the political winners and losers of the controversy around Leinster House. But the success of the Coveney proposals depends on whether they work or not, not whether Coveney managed to get his way over Fianna Fáil.

The breakdown between Fianna Fáil and Fine Gael over rent that has transfixed politics over the last 48 hours or so was never going to bring down the administration.

But it was a proper row, the most serious one between the two parties since they pledged their troth to each other (in a manner of speaking) last spring. And there will be fallout. Fianna Fáil, for one thing, is likely to be a lot scratchier in the new year on a variety of issues. But the confidence and supply arrangement is not there because the two parties like each other; both parties continue to identify the continuation of the Government as being clearly in their interests.

Within Government and especially within his own party, Simon Coveney’s stock has soared. Around Government, he has demonstrated himself to be someone who can push through a policy over opposition from powerful quarters, including the Department of Finance. In Fine Gael, he has stood up to Barry Cowen and Micheál Martin and forced them to back down. Even if many in Fine Gael weren’t wild about the idea of rent controls at all – and that’s putting it mildly – they have been greatly impressed with someone putting manners on Fianna Fáil.

The parlour game of the slow-motion context to succeed Enda Kenny as leader of Fine Gael looks a bit different today. But it would be unwise to place too much emphasis on the long-term effects of a political deal reached the week before Christmas. The aspiration of the Coveney camp that their man has been transformed into a political strongman overnight is a bit far-fetched. Sometimes around Leinster House, everyone reads too much into everything.

Yes, it’s a win for Coveney and he has enhanced his status, showing both tactical nous and political resolve. But his own future, and the reputation of this Government, hinges much more on the actual success of the measures in alleviating the problem of soaring rents than it does on putting one over on Fianna Fáil, delightful and all as Fine Gaelers might find the experience of the latter.

As with the politics, so with the policy. The reaction was mixed among those who advocate for tenants, and housing and homelessness agencies. And introducing the principle of rent controls is highly significant. But the housing shortage, and the complex and unpredictable dynamics that fuel it, is not amenable to simple fixes. Making a difference to the housing problem, and any political credit that might go with it, remains very much a work in progress.

Neither Coveney nor the Government will get credit for anything if the measures don’t work. As ever, what happens in the real world matters a lot more in politics than what happens in Leinster House.