First Minister says she has nothing to hide 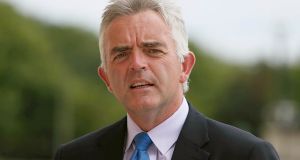 Jonathan Bell said his claims would end his political career, but he had to do his duty to Northern Ireland by lifting the lid on a furore that had left the taxpayer facing an estimated £400 million bill. Photograph: PA

Stormont’s First Minister has said she has nothing to hide over her role in a green energy controversy after a Democratic Unionist colleague and former minister dramatically broke ranks and alleged hundreds of millions of pounds had been abused.

“I am very much looking forward to the truth coming out because I have absolutely nothing to hide,” she said.

In a remarkable intervention, a tearful Mr Bell said his claims would spell the end of his political career, but said he had to do his duty to Northern Ireland by lifting the lid on a furore that had left the taxpayer facing a bill of an estimated £400 million.

He said “documents, emails, times, dates” showed that hundreds of millions of pounds were “abused”. Mr Bell has given an interview to the BBC, which will outline his allegations in full at 10.40pm on Thursday.

“My political career is finished, you are going to be ruined for telling the truth,” Mr Bell told the Nolan Show.

“I have had to do one of the most difficult things I have had to do in my life . . . and tell the public of Northern Ireland the truth, to shine a light onto what has occurred and to deal with a major problem.”

Mrs Foster has faced down calls to resign for her role in the Renewable Heat Incentive (RHI), which was developed during her time as economy minister.

An initiative that was supposed to help businesses mitigate the costs of running eco-friendly boilers actually ended up paying out more than the cost of the fuel — so the more people burned, the more public money they earned. There are claims some applicants to the scheme were in line to pocket #1 million over 20 years for heating empty sheds.

Mr Bell was Mrs Foster’s successor as economy minister. He was subsequently replaced in the role after May’s Assembly election.

In an interview with the Impartial Reporter, a local newspaper in her Fermanagh and South Tyrone constituency, the First Minister said she would lay out the “facts” around the scheme on Monday, during a specially recalled sitting of the devolved Assembly.

“Unfortunately to date there has been 10 per cent fact and 90 per cent spin in relation to this story, so it’s important the facts get out there and I am looking forward to doing that on Monday,” she said.

Reacting to Mr Bell’s remarks, she said: “I think he has stepped outside of the party lines, he has not communicated with me in any way recently, so it’ll be a matter now for party officers as to which action they take.”

“People tell me if you step outside the box, if you put your head above the parapet, it will be shot off,” he said.

“I believe that God doesn’t punish people who tell the truth, so let’s see how it plays out. My only aim is that the truth is told, I have now told it.”

Mr Bell said his wife urged him to reveal what he knew about the RHI.

“This is difficult because hospitals in Northern Ireland will not be built,” he said.

“There is a ward in the Ulster Hospital [which] is closed. Do you think I can sit back and not tell the truth, not when God has told me to tell the truth?

“Dr Paisley was right — ‘Tell the truth should the heavens fall on you’.

“So do with me as they will, but the facts are documents, emails, times, dates - you will not find one single thing that is not the truth.

The RHI aimed to cut the cost of green energy to encourage people to move off fossil fuels, but ended up landing ministers with a massive overspend.

It incentivised the installation of costly eco-friendly heating systems by paying a tariff per kilowatt of heat burned over a 20-year period.

But, unlike in the rest of the UK, in Northern Ireland no cap or payment tier system was placed on the money that could be claimed in proportion to the size of boiler and the hours it was operated.

That resulted in the RHI tariff paid out being higher than the cost of fuel needed to run the boilers.

Thousands signed up to the RHI — a deluge that ultimately forced its closure, but not before Stormont had been left with a huge future bill.

Overall, more than £1 billion of public money will be paid by 2036 to Northern Ireland-based businesses which signed up to the scheme. About £400 million of that will be paid out by the Stormont Executive.

One of the main criticisms facing the First Minister is an accusation she did not do enough to pursue whistleblower allegations that sought to expose flaws in the system — something she has vehemently denied.