Miriam Lord: It was like Pyongyang on the Garavogue 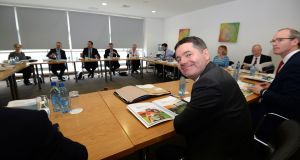 Cabinet special meeting in the Institute of Technology Sligo: it was “a great day for Ireland” said Heather Humphreys. Photograph: Alan Betson 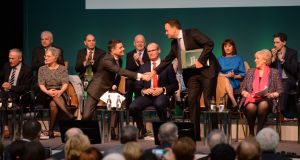 Taoiseach Leo Varadkar with the Cabinet on stage at Sligo Institute of Technology. Photograph: Alan Betson

Never in the history of plans has so much planning gone into the launch of a plan.

“A plan that’s better for how we plan,” said the Minister for Finance.

Project Ireland 2040, to give it its showbiz title.

It was as if somebody in government had stumbled upon an old Fianna Fáil playbook from the time when over-choreographed productions with partners and pillars and platform parties were all the rage.

Some people thought it was all a bit over the top.

But not the Taoiseach.

“We are going to communicate this,” insisted Leo Varadkar at the end of an exhausting day of PowerPoint presentations and briefings and civil servants being trotted out to play nice with the media.

“It’s one of the most important things the Government will do . . . And that DOES require a communications exercise.”

For the big presentation, his Ministers filed in silently and ascended the stage, lined up like ministerial Daleks ready to “Com-mun-i-cate! Com-mun-i-cate!”

The Taoiseach was a bit hurt when it was put to him later that this overblown production was a thinly disguised election manifesto launch. His Ministers were similarly stung by such a cynical charge.

Specially when Paschal Donohoe had so touchingly quoted what the late Ted Kennedy said when introducing then senator Barack Obama at the Democratic National Conference in 2008.

Here’s the quote according to Paschal in Sligo: “If we set our compass true, we will reach the destination of renewal for our nation.”

Here’s what Ted actually said in Denver: “If we set our compass true, we will reach our destination – not merely victory for our party – but renewal for our nation.”

Left an important bit out there, Paschal.

Ministers began arriving early at the Sligo IT campus for their 11am Cabinet meeting. Some came to town the night before, with reports that some enjoyed a down-time pint with TD Tony McLoughlin in a pub called Lillie’s. There were rumours about Finian McGrath doing the salsa.

“I heard you were all in Lillie’s last night,” we said to Minister for Housing Eoghan Murphy. “Bordello?” replied Dublin Bay South man, sounding confused. “Certainly not. I was here in Sligo.”

McLoughlin, being the local representative, was on hand to personally greet every Cabinet member as they were deposited at a large sculpture known as “The Fish”. But he was soon usurped by Roscommon Senator, Frank Feighan, who appeared with the express aim of jumping into all the photos.

Heather cut to the chase.

“Well, this is a great day for Ireland,” she said.

“It’s about the cutting edge of the future.”

Nothing more to say, really.

Except there was. In so many ways. With videos and PowerPoint presentations, rolling tweets of Ministers walking along corridors and down stairs, live streaming, speeches, a totally rigged public Q&A session and gratuitous references to WB Yeats.

Shane Ross, who was wearing his anorak, had a big line which he trotted out more than once.

“It’s the end of a lost decade for Irish transport.”

“I think today is something of a landmark day,” quivered Michael Creed, explaining that Project Ireland 2040 is “the distilled wisdom” of “extensive stakeholder consultation”.

So what is it, Michael?

“It is a whole-of-government plan.” But there is no “silver bullet”.

He curated a string of senior civil servants for a media briefing before the main launch, asking them to elaborate on his beautifully illustrated bullet points which were part of the “bundling” of the 10 pillars in the plan. It was all very well done. Until a stroppy hack stuck her hand in the air before the triumphant finish to wonder if there might be any women involved in the plan, at all, at all.

Actually, there was a woman doing Trojan work, charging around the hall and handing the microphone to journalists who wanted to ask questions.

Unfortunate, what with all that planning.

“My boss is a woman, but she’s not here today,” said a mortified young man afterwards.

Such was the planning that the planners planning the launch had already given extensive special briefing to media key influencers earlier this week.

The big gig was in the sports hall – the Knocknarea Arena, opened in 2007 by Bertie Ahern. It was packed for the launch with students, members of Fine Gael and local politicians and big-wigs. Fianna Fáil TDs from the west were in attendance.

There was a huge green backdrop with “Project Ireland 2040” on it, subtly lowlit with a different shade of green, and 19 seats, all picked out in subtle lighting, on the platform for the Ministers. Portentous music played.

“It would remind you of a Fianna Fáil gig,” we said to one FFer.

“The thing is, we delivered.”

Like everything, the launch was late. Which doesn’t augur well for the plan.

Finally, the junior Ministers filed in and sat in the front row. Then the senior Ministers marched into the room in single file, to rapturous applause.

It was beginning to look more and more like Vanity Project Ireland 2040.

When everyone was in a suitable state of ecstasy, Concannon announced in ringing tones that the president of the students union “will now escort an Taoiseach Leo Varadkar to the stage”.

Super Minister of State Paul Kehoe was filming it on his iPhone. Katherine Zappone was looking great with her Ifta hair. Finian McGrath was muttering like a bad ventriloquist to the Minister next to him and Micheal Ring looked like he was going to explode with excitement.

There was a very snazzy video. The first of two.

Then a toe-curling interlude when students asked the Ministers nice questions about the new plan.

What about Repeal the Eighth? Or student fees? Or the homeless?

It’s never good when a Minister replies with “I’m glad you asked me that.”

“I feel quite emotional today, to be honest” said Chief Whip Joe McHugh, when asked what the northwest was getting in the plan.

Micheal Ring was so delighted to be asked a question he bellowed “Thank you” and nearly broke the microphone.

It is not rehashing. Seemed a bit hurt. “It is rehonouring our existing commitments.”

Among the happy Fine Gael backbenchers standing at the back was Fergus O’Dowd. He was delighted. Drogheda was “explicitly mentioned”.

There were lots of speeches before the Taoiseach stepped centre stage.

“I am the Minister for Transport,” said Shane Ross before he said his piece.

Leo spoke for 17 minutes, although by then, most of us were beyond caring.

“Sligo, I think, will forever be associated with the poet of our national imagination – the great William Butler Yeats. Today we launch an ambitious plan for the future of Ireland. Reimagining our country. And I can think of no better place to do that, than here in Sligo.”

As of last week.

To crown a glorious day, former TD John Perry leapt on to the platform to personally congratulate the Taoiseach.

“Not merely victory for our party, but renewal for our nation.”