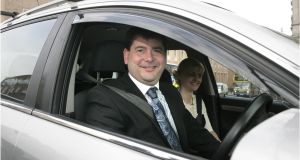 Dara Murphy is stepping down as a TD with Fine Gael to take up a job in the cabinet of EU commissioner Mariya Gabriel. Photographer: Dara Mac Dónaill

It was a devastating Wednesday in the Dáil as TDs came to terms with the shock news that they would no longer hear the familiar voice of Dara Murphy extemporising exquisitely from his well-worn seat on the Government benches.

Regular sittings always felt incomplete without a lively contribution from the ever-present TD for Cork North-Central as he pronounced on the great issues of the day. When the legislature grappled with subjects of major national importance, politicians from all sides asked themselves the same question: “What would Dara say?”

A familiar figure around the corridors and in the chamber, a stalwart on the committees and a regular turn on the plinth for media interviews, the always accessible Fine Gael man was a model parliamentarian. When he wasn’t talking about national or international affairs, he was forcefully expounding on the things that mattered most to his precious constituents.

Just doin’ the job, because that was his job. The one he was elected to do by the good people of Cork North-Central, where the mood is reportedly now very sombre and even the Boys of Fair Hill have stopped singing and gone into mourning.

In the past two years, people used to exclaim when Dara passed them in his usual rush to speak on a motion or chair a meeting or chaperone yet another group of grateful constituents around Leinster House: “Say what you like about politicians, but that Dara Murphy bloke is worth every cent of his €96,189 basic salary plus expenses.”

The news hung over the Dáil all day like a dark cloud or the smell of decomposing drisheen.

In their sorrow and confusion, ashen-faced politicians, staff and journalists barely managed to struggle out the two words that instantly came to mind as the Oireachtas family slowly came to terms with this bombshell.

It was the suddenness that caught everyone by surprise. In truth, people had been preparing quietly, in their own way, for the end. They knew since May 2018 that Murphy would not be running for re-election as he had sorted out a better number for himself in Europe. But even though he thoughtfully broke that news over 1½ years ago, the die was cast six months earlier in 2017 when the full-time TD landed himself a big job with the European People’s Party in Brussels as its campaign director for the 2019 European elections.

The European People’s Party doesn’t have any seats in Dáil Éireann, unless you count all the Fine Gael seats. The party is affiliated to the European group, so Dara could be viewed as a serving FG/EPP TD. (That’s the way Fine Gael viewed it anyway.) No doubt the voters of Cork North-Central will understand.

However, on Tuesday evening, word emerged from Brussels/Dublin/Cork that deputy Dara would resign his Dáil seat next month for a fierce big job in Europe, this time as a top adviser in the cabinet of the incoming EU Commissioner on Youth and Innovation, Mariya Gabriel.

“Why oh why is it always the good ones who are taken from us first?” wailed political rivals to nobody at all

It is difficult to predict how Leinster House will react in the coming weeks to this development. The good news is that the TD (who has been largely based in the Brussels employment shop window doing EPP work for the past two years) is stepping down at the end of December. As there will be a general election in the first half of next year, there won’t be a need for a byelection.

This should give the parties time to select extra candidates for their general election ticket. Obviously two people will be needed to do the job that Dara did.

An echo of anguish

Away from Dublin on Wednesday, where continuing protests by beef farmers brought traffic to a standstill in the city, and Dáil rows on health, housing and fracking took the raw edge off the sense of loss in Leinster House, politicians in Cork were queuing up to tell the Evening Echo about anguish.

“Why oh why is it always the good ones who are taken from us first?” wailed political rivals to nobody at all.

Fine Gael Senator Colm Burke, running in Friday’s byelection for the seat vacated by Fianna Fáil’s new MEP Billy Kelleher, is bearing up as well as might be imagined in such trying circumstances. Colm told the Echo’s Sarah O’Dwyer he wasn’t making an official comment on Dara’s departure.

“I am not going to be dictated to by anyone,” he said. “I want to focus on the work I’ve done and I’m going forward on my record,” trembled Colm, who bravely added he wasn’t concerned with the record of any other TD from the constituency.

Fianna Fáil’s candidate, Pádraig O’Sullivan, mused that the phrase “absentee TD” has been used frequently in relation to Dara, but he wasn’t going to do that. Instead he will let the people decide on that.

“I would be very slow to make personal comments of any type, but the point is Dara’s actually been missing, he’s been absent for two years,” said Sinn Féin councillor Thomas Gould. “I believe Dara Murphy and Fine Gael have treated the people of Cork North-Central with contempt.”

Labour’s John Maher didn’t think Dara Murphy’s resignation would make any difference at all. “He hasn’t been doing the work.”

Understandably distraught, the lot of them.

And so, after two years of towering non-appearance, a doleful Dáil Éireann is doing its best to solve the conundrum thrown up by the departing Dara.

How will parliament cope? How to fill a huge void left by a huge void?

They will be asking themselves for one last time: “What would Dara say?”