Government has declined to release price, saying contracts have not been signed 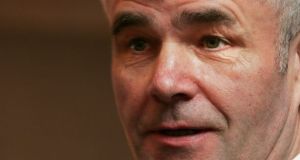 Entrepreneur Pádraig Ó Céidigh was appointed to the Senate by Enda Kenny in 2016 at the suggestion of the Fianna Fáil leader Michéal Martin.

The state will pay €2.75 million for Connemara Airport, The Irish Times has learned.

Ministers approved the decision to buy the ailing airport at Tuesday’s Cabinet meeting. However, the Department of Culture - which has responsibility for the islands - and the Department of Finance declined to release the price, saying contracts had not been signed.

However, The Irish Times understands that heads of agreement between the two sides has been signed and stipulates the price of €2.75 million. The airport is owned by Senator Pádraig Ó Céidigh.

The deal has been promoted by the Galway TD and Government chief whip Sean Kyne, who also has responsibility for the Islands and the Gaeltacht.

Ministers were told the airport is seen as “of strategic importance with regard to the long-term security” of air services to the three Aran Islands, which is described as a “lifeline service”.

The route is heavily used by tourists during the summer, but mostly islanders for much of the year. The State currently pays Aer Arann €800,000 a year to provide regular air services to the islands, though the airline - which is also owned by Mr Ó Céidigh - has said the subsidy is insufficient to continue the frequency of the service.

The company threatened to withdraw from the public contract to fly to and from the islands, but last year the State undertook to consider purchasing the airport from the airline.

Ministers were told: “In the intervening period, a detailed analysis was undertaken to evaluate the case for purchasing the airport. This included a valuation, evaluation of alternative options (including the option to build an alternative facility...), legal and engineering due diligence, and a business case under the Public Spending Code prepared by external consultants.”

“Arising from these considerations ...the Minister of State has approved the purchase of the airport at a cost of €2.75m to be met from within the existing vote of the Department.”

Mr Ó Céidigh is a well-known entrepreneur who was appointed to the Senate by Enda Kenny in 2016 at the suggestion of the Fianna Fáil leader Michéal Martin. He considered a bid for the presidency last year, but decided against running.