Miriam Lord: What’s Leo going to do about You-Know-Who? 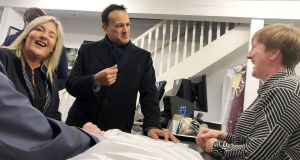 There was a big write-up in a paper on Sunday and it concerned You-Know-Who. Micheál Martin is not one to bandy names about willy-nilly in the Dáil. Nonetheless, a concerned Fianna Fáil leader felt compelled to raise the article in the Business Post while he had the Taoiseach’s attention. In case anyone missed it.

The piece was primarily to do with a letter written by the chief executive of the Road Safety Authority to “the person concerned”. Micheál was naming no names. And neither was Leo Varadkar. No chance.

The Taoiseach, when pressed, conceded he read the article too, although he felt he couldn’t express concern about the subject matter because he hasn’t “all the facts”. Obviously, the only way to get all the facts would be to make further inquiries immediately, given the serious nature of the story and the central role apparently played by “the person concerned”.

But then, who would give them to lowly Leo? He’s only the Taoiseach. Then there’s the part in Michael Brennan’s report where this big noise in the haulage industry allegedly tells an official from the road safety agency – while urging him to hurry up with the implementation of laws concerning the haulage sector – that she is well got with one Leo Varadkar.

If you were a Taoiseach called Leo Varadkar and your unblemished name was being dropped like that by the person you had personally chosen to contest a byelection, you’d probably really, really want to know the full facts, soon as. Not least because the poll is happening in a few days’ time in Wexford and it would be wonderful for all concerned to clear the air.

If only Leo had been able to spend some time with “the person concerned” in the article in the short time available to him after its publication and before the byelection vote. That surely would have helped get the full facts.

Because Micheál Martin is a gentleman, he certainly wasn’t going to identify the individual mentioned many times in the news report. However, neither could he let the opportunity pass on Tuesday afternoon without bringing his disquiet over its contents to the floor of the Dáil.

The Road Safety Authority “has been an essential instrument in significantly saving lives on our roads and reducing the degree of injury on our roads”, he began, helpfully setting the scene for an ungrateful-looking Leo. But then, unlike the RSA’s target audience, the Taoiseach knew what was coming next.

“I’m sure you were also very, very concerned at reports of interference with the work of safety officers of the Road Safety Authority,” soothed Micheál, oozing concern over the “concerning” Business Post article which reported that the head of the RSA sent a letter to the president of the Irish Road Haulage Association (IRHA) requesting that person to cease “continued interference with the work of safety officers” and warning that there should be “no 45-minute phone call with safety inspectors” carrying out roadside inspections.

Oh, very. You could tell that by the sour look on Leo.

Maybe the Minister for Transport might give the Dáil a “full presentation” into that kind of interference? Concerned of Cork South* Central reminded the Dáil that the agency’s CEO “wrote the letter to the person concerned . . . And, irrespective of anything else going on, that’s something that needs to be stamped out.”

Irrespective of what? What else is going on, Micheál? He wasn’t saying, but – and we’re taking a wild stab at it here – he might have been referring to the byelection in Wexford where his candidate is doing very well and Leo’s Fine Gael candidate has been embroiled in a succession of embarrassing gaffes and apologies.

But the Fianna Fáil leader was trying hard not to make this party political and score points in the crucial final days of the campaign. Absolutely not. This is why he didn’t mention any (wink, wink) names.

“The RSA has been a success story – it has saved lives and has reduced injury and I think that type of interference should be stamped out,” declared Micheál.

He sat down, the Fianna Fáil front bench soused in the puddle of his dripping concern. The Taoiseach hauled himself to his feet.

“In relation to the Minister for Transport, I think you’d probably best raise that with him as a topical issue or perhaps as a private notice question.” And that was it. No mention of You-Know-Who, his candidate.

Concerned of Cork South Central looked very pained. “Are you not concerned about what you read?” he demanded. “You read it as well as I did.”

Leo, looking cheesed off, gave a curt reply. “I read it but I don’t have all the facts about it.”

Skin in the game

Labour’s Brendan Howlin, who has skin in this particular game as a Wexford TD, couldn’t stay silent. “Did you not talk to the Minister about it?” he cried.

Not a word from the Taoiseach. Nothing to say. Brendan broke into a loud bout of tut-tutting. Micheál made a last attempt. “Did you not bother to check with the Minister, Ross?”

Leo sulked an unconvincing “I will”.

It’s a real pity he didn’t get a chance to check with “the person concerned” when he travelled to Wexford on Monday afternoon to meet her and they spoke privately before canvassing the town together for 40 minutes.

How chivalrous of both Micheál and Leo not the mention Verona Murphy’s name in the Dáil. Not that it mattered – everyone knew who Micheál was keen to talk about and who Leo was keen not to talk about.

Will the controversial haulier, whose comments about asylum seekers and other issues have earned her massive exposure in the run-up to Friday’s vote, take a seat for Fine Gael? She must be feeling optimistic.

On Tuesday, as the Dáil tackled the Verona Murphy question, some Oireachtas members were pleased to find an invitation from Verona to a Christmas party to be held days after the election for the seat vacated by new MEP Mick Wallace. Issued in her capacity as president of the IRHA, Murphy “cordially invites” TDs and Senators to a “patrons reception” in the Merrion Hotel, opposite Government Buildings, on Wednesday December 4th, between 6pm and 8.30pm.

If she wins, she will be a TD when the bash comes around.

EU will keep a seat free for UK after Brexit, says Varadkar