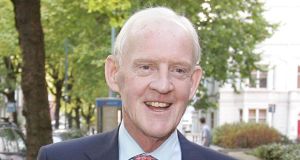 Larry Goodman’s ABP Food Group has been accused in the Dáil of effectively stalling the beef taskforce through its failure to lift “legal threats”.

Independent TD Denis Naughten said “one organisation is holding the whole industry to ransom”. He was one of numerous TDs to raise the beef crisis and blockade in the House as the farmers’ protest in Dublin city centre wound down.

An ABP company C&D Petfoods was one of a number of meat processors to secure injunctions during the summer after farmers blockaded a number of factories in protest against the price they were receiving for cattle.

Mr Naughten said it had led to huge frustration and anger that had boiled over into the blockade in Dublin.

He said in the Dáil that it was “unacceptable that Larry Goodman’s ABP Food Group has effectively stalled the beef taskforce” by failing to lift the injunctions.

Leas Cheann Comhairle Pat ‘The Cope’ Gallagher warned TDs to “be careful of mentioning names of those not here to defend themselves”.

Minister of State for Agriculture Andrew Doyle said it was in everybody’s interests that the taskforce get underway.

Earlier however Taoiseach Leo Varadkar ruled out asking the company to lift the injunction against two Longford farmers as part of efforts to get the beef taskforce up and running.

Sinn Féin TD Brian Stanley called for the Taoiseach and Minister for Agriculture Michael Creed to contact C&D Petfoods to ask them to lift the injunctions.

“There can’t be a level playing field between the factories and farmers while one side has a legal action hanging over the other side,” he said.

Mr Varadkar said: “I think it would be really inappropriate for a Minister in the Government to put pressure on anyone to have an injunction removed. That really is a matter for the courts.”

He said the Government had been working really hard to get the taskforce up and running but he said it was not operating because “some of the people trying to attend the taskforce were intimidated and assaulted”.

Independent TD Mattie McGrath said farmers were on their knees and he accused the Government of being “in bed with Larry Goodman”.

He also called on Minister for Agriculture Michael Creed to apologise for the “slur” that farmers were “involved in death threats”.

But rejecting the criticism Mr Doyle said the Minister had met some of the farmers on Wednesday morning, answered their questions and clarified “that he never inferred that anyone involved in the injunctions was responsible for the threats” which had been made to senior management at C&D Petfoods.