Some 1,500 passengers arrived from the South American country in past fortnight 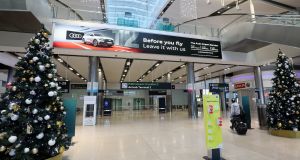 An almost empty arrivals hall in Terminal 2 of Dublin airport over Christmas. More than 50,000 people flew into the country over the holiday period. Photograph: PA

Some 1,500 recent arrivals from Brazil in the past two weeks have been asked to contact a GP, get a coronavirus test and restrict their movements by the Minister for Health.

Stephen Donnelly made the call on Sunday due to rising concerns about the impact of new variants of Covid-19, including one that has been traced to the South American country.

Variants of Covid-19 that originated in the UK (known as B117) and South Africa (B1351), have been found in the Republic.

Variants originating in Brazil (P1) but not yet detected in Ireland, have also emerged and a Nigerian variant also exists.

Mr Donnelly’s call comes a week after the State imposed restrictions on travellers from the UK and South Africa, requiring a negative PCR test result 72 hours before travel.

A similar obligation for arrivals from all other countries came into effect on Saturday.

The UK variant within a matter of weeks of discovery has emerged as a significant strain in the Republic.

Virologist Dr Cillian De Gascun, who is director of the National Virus Reference Laboratory, said it was inevitable it would become the dominant variant in Ireland. “Due to the nature of the mutation found in the UK variant of the virus, it is inevitable that it will become the dominant variant here in Ireland over time. The UK variant has adapted to us: simply put, it is better at moving from person to person when we come into contact.”

There are two new variants in Brazil; one that is rampant but of little concern, and B1351 (now found in Japan) considered a lot more alarming.

The Minister said on RTÉ’s This Week programme that the Government may look at putting a 14-day quarantine requirement on a statutory basis for arriving passengers.

When it was previously looked at, it was not considered a “proportionate” response.

“I would like to see, given the UK variant and the huge damage it is causing, is that now something we could look at.”

“Anyone flying into the country will have to have a negative PCR test three days before travel. On arrival passengers have to restrict their movements for 14 days unless they get a second test after five days, but the 14 days’ restrictions remain in place for those travelling from South Africa and Britain.”

He would like to see increased compliance but stressed that “the regime is a good regime”.

Earlier this week figures from the Department of Health revealed that just 16 per cent of the more than 54,000 people who travelled into the State over the Christmas and New Year period received follow-up calls to check they were restricting their movements after their arrival.

The department said follow-up text messages were sent to 71 per cent (38,990 of the 54,793 who completed the form ahead of travel into the country between December 21st and January 3rd.