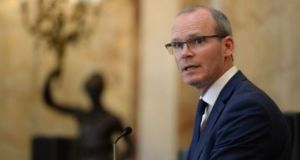 Minister for Foreign Affairs Simon Coveney hopes to travel to Moscow and Tehran as part of the State’s membership of the UN Security Council to press for humanitarian action in Syria.

Setting out the Government’s objectives for its two-year term on the UN’s inner body, Mr Coveney said he hoped to engage with the larger countries which are permanent security council members to encourage action in contentious areas, such as political and humanitarian action over the Syrian conflict that is a decade old this year.

Ireland started its two-year term on the council on January 1st after winning election last year to one of the temporary seats – just the fourth time the State has held a seat on the UN body.

Mr Coveney said that it was by “intense diplomacy and dialogue and building relationships” that permanent security council members could be persuaded to take action.

Syria was “particularly challenging and difficult in that regard,” he added in response to a question posed by a Syrian refugee living in Ireland at a web event on Friday.

Russia and China, both permanent members of the council, have vetoed UN resolutions on the conflict in Syria since 2011, while Iran is a key ally of Syrian president Bashar al-Assad.

“We will do everything we can to try to build relationships that can get results as opposed to simply get a good headline for a few days where Ireland is taking a stand but actually making no difference. That is the approach I want to try to bring to our term on the security council.”

Mr Coveney is travelling to Turkey next week.

He welcomed the change in “tone and direction” from the US under Donald Trump to Joe Biden, as outlined in his inaugural address this week, and said that the new president’s decision to rejoin the Paris climate agreement and to halt the US departure from the World Health Organisation in his first hours after taking office on Wednesday was “enormously significant”.

He welcomed Mr Biden’s intention to seek a five-year extension on a key nuclear arms treaty that is “crucial for international and European security”.

He said he hoped that the new US president would also seek an early review of the US decisions to stop funding to the United Nations Relief and Works Agency for Palestine refugees and UNFPA, the United Nations Population Fund on global population and reproductive health.

Mr Coveney told the IIEA that the Government wanted to play “a constructive and thoughtful role” on the council and to support the work of promoting international peace and security.

Ireland was joining the council “at a complex moment in international affairs” with a threefold increase in workload compared with when the State last held a seat 20 years ago, he said.

“We face an uncertain global landscape, marked by tensions and regional rivalries, the unravelling of international arms control regimes, the threat posed by terrorist organisations and other non-state actors and the global challenge of climate change, increasingly seen as a multiplier of conflict and stability,” he said.

“These challenges have been compounded by the coronavirus pandemic, and by an increasing sceptical response from many countries and different parts of the world questioning the value of multilateralism.”

Ireland believed that the UN “remains indispensable” and that the country ran for election to the security council “because we want it to succeed,” he said.