Every adult in Ireland to have Covid-19 vaccine by September, Minister for Health says

The Government intends to ensure that every resident in Ireland will receive the Covid-19 vaccine by September, Minister for Health Stephen Donnelly has told the Dáil. Video: Oireachtas TV 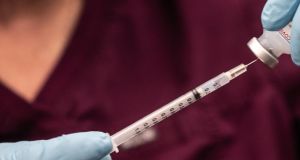 The Government is planning for every adult in Ireland to receive the Covid-19 vaccine by September, Minister for Health Stephen Donnelly has told the Dáil.

But he said Ireland would go “into the buffers” this week on vaccine supply because of the announcement of a cut of 50 per cent in the Pfizer vaccine production while the company’s manufacturing facilities were upgraded.

He said the timelines were indicative but the Government would receive 3.3 million doses of the AstraZeneca vaccine after approval, which is expected at the end of January, and every resident would have the vaccine by September.

Describing the AstraZeneca vaccine as a “game changer”, Mr Donnelly said it was being produced on a not-for-profit basis and would be more easily usable because it could be stored in a normal fridge.

Ireland will receive 600,000 doses on a quarterly basis which will mean 300,000 people will be vaccinated in the two-dose regime.

The State will get its delivery from AstraZeneca on a monthly basis, with 40,000 doses a week from Pfizer. An initial shipment from Moderna of 4,000 to 6,000 doses has already been received.

About 94,000 people had received the vaccine by last Sunday, he said.

“We’re on course to meet our target for this Sunday of 140,000 split broadly 50/50 between frontline workers and residents over 65 in long-term care settings, including those with a disability and staff.”

Up to last night 121,900 vaccines given to our frontline healthcare workers and residents and staff in nursing homes. Well done to all involved, especially @paulreiddublin @CcoHse @HSELive @roinnslainte @AmbulanceNAS @defenceforces pic.twitter.com/Zssb5hGXzB

A number of TDs questioned the targets and Fianna Fáil TD Marc MacSharry said “the supply chain that is available to us and the vaccines available to us do not add up to meeting that sort of deadline”.

However, the Minister insisted the 140,000 target would be met.

He also said the prioritisation list for receiving the Covid-19 vaccine was a “living document” and must be open for review.He told Fine Gael TD Colm Burke who raised concerns about 2,000 people receiving dialysis who are down the priority list, that he was “sympathetic” to the concerns of those with underlying conditions.

Concerns had also been raised about people with other underlying conditions, including cystic fibrosis, which rendered them very vulnerable to corona virus.

The National Immunisation Advisory Committee (NIAC) set out the principles based on the evidence available. It was endorsed by the National Public Health Emergency Team (Nphet) and subsequently agreed by Government, Mr Donnelly said.

Describing it as a living document, he said that “as new evidence emerges and as we learn more and we get new vaccines and we find out more, we must be open to reviewing the prioritisation”.

The Minister told TDs that carers formally employed in the healthcare sector would be included as essential workers, as would dentists.

He also told Sinn Féin health spokesman David Cullinane that he was aware of three hospitals - the Coombe, Rotunda and Kerry - where the protocols on prioritisation of the vaccine had not been followed.

The chair of the Coombe maternity hospital told him that a senior counsel had been hired “to establish all the facts” in an independent review into how 16 family members of staff received the vaccine on January 8th.

The hospital had also appointed a senior clinician to lead the hospital’s vaccination rollout, which he welcomed.

He added that he had asked the HSE to look right across the system to check this.

Labour health spokesman Duncan Smith said “resentment is breeding within the healthcare sector about the order of allocation.

“There are workers who are front-facing and meeting the public who are questioning why others have got the vaccine”.