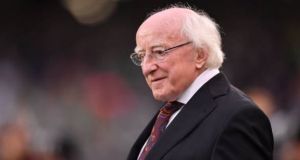 President Michael D Higgins: running in the presidential election of 2011, he said he would only serve one term

President Michael D Higgins continues to enjoy the support of a substantial majority of voters for a second term, the latest Irish Times/Ipsos MRBI poll has found.

However, when asked if they were aware that the President had originally said he would serve only one term, a slim majority of voters – 52 per cent – said they were not aware.

The issue is likely to confront President Higgins if, as expected, he decides to seek a second term when his current term expires in November.

In January, when The Irish Times last polled on the question, support for a second term for Mr Higgins was at a similar level, 59 per cent.

The President’s term of office expires in the autumn of this year. He has not yet formally indicated if he intends to seek a second term, but the expectation in political circles is that he will, with an announcement anticipated this summer.

Recently The Irish Times reported that sources familiar with the President’s thinking have advised political figures likely to support his candidacy of his decision in order to prepare for an autumn campaign. Political sources expect an announcement before the Dáil rises for its summer recess and next week’s abortion referendum.

Mr Higgins previously said he would make his intentions clear by September, with a presidential election due to take place by November at the latest.

Running in the presidential election of 2011, Mr Higgins – who is now 76 – said he would serve only one term but he appears to have moved away from that position and has hinted a number of times that he might seek a second term.

Senator Gerard Craughwell has already said he intends to challenge Mr Higgins for the presidency, while other politicians have also indicated a possible interest.

Mr Craighwell claims to have the support of the 20 members of the Oireachtas required to get on the ballot paper for a presidential election. Another method of nomination for a prospective candidate is to secure the backing of four local authorities. As the incumbent Mr Higgins can nominate himself for a second term.

Neither Fianna Fáil nor Fine Gael are keen for a contest, with both major parties instead focussed on the next general election. However, Sinn Féin leader Mary Lou McDonald has said that she wants to see an election for the post, and the party is currently mulling its options. She said former party president Gerry Adams would not be a candidate for the post.

The poll was conducted on Monday and Tuesday of this week among a representative sample of 1,200 voters aged 18 and over in face-to-face interviews at 120 sampling points in all constituencies. The margin of error is plus or minus 2.8 per cent