Varadkar: Only a matter of time before someone ‘bleeds to death’ if abortion No vote 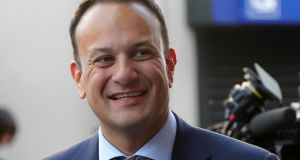 Taoiseach Leo Varadkar claimed in Friday that more and more women were importing pills online because of the current abortion laws in Ireland. Photograph: Collins

It will only be a matter of time before a woman bleeds to death if the referendum to repeal the Eighth Amendment is defeated, Taoiseach Leo Varadkar has said.

Renewing his appeal to the electorate to vote Yes in the referendum which takes place next Friday, May 25th, Mr Varadkar said more and more women were importing pills online because of the current abortion laws in Ireland.

They were being used unsafely and “it’s only a matter of time before somebody loses their life as a result of taking one of those pills over the internet,” Mr Varadkar said.

“It has happened in other countries.”

He appealed to voters not to wait for this to happen.

“If there is a No vote on Friday I think it’s only a matter of time before somebody haemorrhages or bleeds to death or dies as a result of using these pills unregulated,” he said.

The Taoiseach also said “those who are most against abortion are the same people who oppose sex education and greater access to contraception”.

His comments came as Limerick woman Vicky Phelan, who brought the CervicalCheck controversy to light, called for a Yes vote in the abortion referendum so that women can “make the choice about our own care”.

In a tweet on Friday the 43-year-old woman, who is now terminally ill with cervical cancer, said: “I am voting Yes for the women of Ireland who have been let down by our health service and by our Government time and time again.

“If we really want women to be placed at the centre of their own care, vote Yes to allow us to make the choice about our own care,” she said.

Mr Varadkar, who was speaking on RTÉ radio’s Today with Sean O’Rourke programme, said “the case we’re making is that the Eight Amendment has failed.

“People thought at the time that it would save lives. It hasn’t. Our main case is that this is a reality and we have to face it.

“We should be able to deal with these crises in a compassionate way,” he said.

In his interview the Taoiseach said voting for repeal of the Eighth Amendment is not endorsing abortion, but it recognises that everyone has a right to make that choice.

His comments followed this week’s Irish Times/Ipsos MRBI poll which showed a clear but diminishing advantage for Yes with 58 per cent in favour of repeal and 42 per cent against, when undecided voters were excluded.

The figures showed 44 per cent of voters had stated they would vote in favour of repeal, a drop of three per cent since last month.

Support for a No vote was at 32 per cent, an increase of four points, while 17 per cent were undecided and 7 per cent would either not vote or would not say how they were voting.

Mr Varadkar said that people opposed to abortion who claimed that a woman could claim mental health issues as grounds for an abortion obviously had a very low opinion of women.

He said that as a GP and during Obstetric rotations in Holles Street and St James he had met many women experiencing crisis pregnancies but could not advise them.

He said that politically or ethically he could not accept the Eight Amendment.

There were many grey areas on the issue and his views had changed over time. “There’s nothing wrong with that. Life experience teaches you that.”

Mr Varadkar said if the electorate voted for repeal “it won’t be unrestricted and it won’t be on demand”.

“Women won’t be able to walk in, bang a table and demand pills. Not that they’d do that.”

“No woman who is experiencing crisis pregnancy will be able to go into the pharmacy and bang the table and demand abortion pills. Not that I think anyone would ever do that.”

On the issue of disability, Mr Varadkar said there would be no provision for disability as a grounds for abortion. If a woman made a decision to have an abortion on the grounds of disability she would have to go to the UK.

The only grounds for an abortion post 12 weeks would be a threat to the life of the mother, or a risk to her health. He said that anyone who thought a woman would fake a mental health issue to get a termination had a very low opinion of women.

He warned that if the repeal does not pass then under age girls, rape and incest victims and in cases where there was a threat to the health of the mother would not be able to access an abortion and nothing could be done for another generation.

He did not accept that more women would have abortions if it became available. The number of Irish women travelling for abortions has fallen in recent years and had fallen in other countries too, he said, because of easier access to contraception, sex education and the morning after pill.