Varadkar: no referendum rerun for ‘once in generation’ verdict 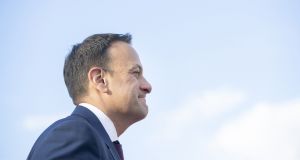 The opposing sides in the abortion referendum campaign are preparing for an intense run-in with Taoiseach Leo Varadkar emphasising that the result of Friday’s vote will be a “once in a generation decision”. Photograph: Jasper Juinen/Bloomberg

The opposing sides in the abortion referendum campaign are preparing for an intense run-in with Taoiseach Leo Varadkar emphasising that the result of Friday’s vote will be a “once in a generation decision”.

If the proposal to repeal the Eighth Amendment is defeated on Friday, the Government will not hold a second referendum and it could be another 35 years before voters get to have their say on the matter again, Mr Varadkar said.

However, those campaigning to retain the amendment will appeal to voters this week to “send them back for something better”. They will assert that the Government can return with proposals on abortion that are more restrictive than the current plan to allow terminations on request up to the 12th week of a pregnancy.

Mr Varadkar challenged those on the No side to come up with an alternative to the Government’s proposals.

“This is not a new debate, this has been going on for decades,” he said. “If there was an alternative wording we could put into our Constitution, why has nobody produced it? And secondly, would those people who are voting No support that?”

Mr Varadkar criticised the “scare tactics” he said were being used by the No side, especially a focus on disability in the referendum debate. He said the same approach was used in the same-sex marriage and the divorce referendums but the claims made by the No side then “have not happened”.

He stressed that the vote on Friday was the only chance to change the constitutional ban on abortion for the foreseeable future and that if the referendum is defeated, it would be a lost opportunity to assist thousands of women who find themselves in a crisis pregnancy situation and who decide they cannot continue with the pregnancy.

With opinion polls in the Sunday newspapers suggesting a continuing strong lead for the Yes side, both campaigns are now focused on this week’s television debates which take place on RTÉ on Tuesday and TV3 on Wednesday.

Government ministers are expected to play a prominent role in the final days of the campaign, with Ministers appearing on the TV debates and the Taoiseach planning a series of interviews. However, No campaigners intend to welcome increased visibility of politicians, who they will warn voters “not to trust” on the legislation that would follow a Yes vote.

The No campaign will spend heavily on online ads in the final few days, targeting undecided voters and warning them that the Government’s proposals are “too extreme”. The campaign says it will spend about €70,000 on online ads this week.

The No campaign will also appeal to people to “have the courage to vote No”, Mr McGuirk said, in a push back “against the idea that that you’re a bad person if you vote No”.

The two campaigns will also concentrate on efforts to get their voters to turn up to the polling stations on Friday – the so-called “get out the vote” effort.

Older voters, who are considerably more likely to be No voters, are usually better at turning out than younger people. However, the National Youth Council estimates that up to 125,000 people may have been added to the register of electors in recent weeks and that it expects many of these are young people. The polls consistently suggest that younger people are much more likely to be Yes voters.