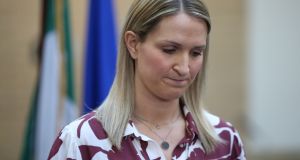 Minister for Justice Helen McEntee: it looks like she didn’t tell two of the people at her pre-Cabinet meeting about the other three applicants. Did she tell Leo Varadkar, her boss? Photograph Nick Bradshaw

Helen McAbsEntee, Minister for Justice, won’t be coming before the Dáil anytime soon to answer questions on the part she played in the selection of our newest Supreme Court judge.

Which is a pity, although not for the Government.

Unrelenting Opposition pressure for her to answer questions on the issue saw the Minister availing of a safe space on Tuesday afternoon to publicly explain how the decision was reached.

But McAbsEntee failed to calm the situation, succeeding instead in keeping alive the simmering controversy over Séamus Woulfe’s appointment to the highest court in the land.

With this in mind, perhaps the Taoiseach was right to insist earlier that it would be highly inappropriate to haul a Minister for Justice into the House to say why the Government selected a particular judge.

She wouldn’t have been allowed escape with just the briefest of statements (no questions) at the end of an Oireachtas committee meeting on the 2020 Supplementary Estimates for Public Services.

After the calamity of Golfgate, it is unfortunate that former attorney general Woulfe should find himself at the centre of yet another political row, this time to do with the manner of his appointment to the Supreme Court.

Had he not attended the infamous 19th hole, Covid-tainted dinner in Connemara in August, Woulfe would have settled anonymously into his new job in the Four Courts with his fellow masters of the legal universe.

With his judicial peers incapable of dealing promptly or proportionately with their colleague, and politicians understandably unwilling to accept a hospital pass from the judges looking to offload the problem, it seemed as if the Woulfe saga was finally fizzling to an end.

Having been attorney general in Leo Varadkar’s government before Leo progressed seamlessly to Tánaiste in Micheál Martin’s Coalition, senior counsel Séamus wafted on Fine Gael wings to the Supreme Court despite his pinstriped posterior never brushing the judge’s bench in a lower court.

A routine elevation which has the stamp of government business as usual about it. It’s the way they do things in Merrion Street, in between pious bouts of promising to change our politically driven system of appointing judges.

On Tuesday, when the Taoiseach staunchly defended Minister McAbsEntee’s right not to appear before her fellow TDs to explain how “expressions of interest” from three other sitting judges in filling the role were not shared with the Cabinet, he was reminded by Opposition deputies of the time he railed against the appointment of another former attorney general to another fierce big job in the hierarchy of beaks.

He couldn’t deny giving out with gusto when, as leader of the opposition, he castigated then taoiseach Varadkar over the controversial appointment of outgoing attorney general Máire Whelan to the Court of Appeal when she hadn’t even applied for the job.

When Varadkar told him during a stormy Dáil session that Fianna Fáil appointed current Chief Justice Frank Clarke to the High Court without going through the Judicial Appointment Advisory Board (JAAB) and put fast-tracked Donal O’Donnell and the late Adrian Hardiman into the Supreme Court, Martin seethed: “Máire Whelan is no Frank Clarke. Máire Whelan is no Adrian Hardiman.”

Fianna Fáil’s Jim O’Callaghan, who is a senior counsel, declared on a radio programme that “there will be consequences”.

This latest Woulfe-themed row over judicial appointments is not comparable to the Whelan episode, the Taoiseach told Sinn Féin’s Mary Lou McDonald, who had wasted no time reminding him he “had no problem attacking” the appointment of a previous attorney general.

Labour’s Alan Kelly told Martin he was “afraid” to put the Minister for Justice forward in the Dáil to iron out Opposition queries over the manner of the appointment.

Catherine Murphy of the Social Democrats presumed a candidate’s “lack of experience would be interrogated” and was struggling to get her head around the news that three judges had also applied, but the Taoiseach wasn’t made aware of this when discussing the Supreme Court job with Minister McAbsEntee.

The Taoiseach thought it all a storm in a teacup. Hadn’t the JAAB recommended one candidate? That was good enough for him. However, the other three didn’t apply through the advisory board but through the attorney general’s office. Apparently their names were sent to the Department of Justice and kept on file as the man from Donegal Catch might put it “a filing kyabinet”.

All very interesting. But Martin insists the Minister for Justice can’t come into the Dáil to discuss this because it would constitute a gross breach of the principle of the separation of powers.

And don’t talk to Martin about the separation of powers. Since assuming the office of Taoiseach he has become a leading authority on the matter.

Did he really have to bring the shutters down on any talk about how appointments are made?

Especially when no less an authority than the Ceann Comhairle deemed a discussion on the selection process allowable once TDs didn’t “stray into the area of personal suitability that would reflect on any individual that has been selected”.

Mary Lou and Alan Kelly had no intention of letting the matter rest. As it stands, the Taoiseach and Eamon Ryan, the leader of the Greens, were not made aware of the “expressions of interest” when they discussed the appointment with Tánaiste Varadkar and the Minister before the Cabinet meeting which rubber stamped the one name put forward. This is nothing unusual, it is always just a single name.

The spokesman said he could not comment as the process was confidential.

Here’s what Minister McAbsEntee said in her brief statement (she could have told the Dáil) after her committee appearance: “I looked at the recommendation that had been made, and other expressions of interest that often come for any of these positions. Following that, I spoke with the Taoiseach, the Tánaiste, Minister Ryan and the AG and on foot of that a recommendation was made and a name was given to Cabinet. There is only ever one name given to Cabinet.”

But it looks like she didn’t tell two of the people at her pre-Cabinet meeting about the other three applicants. Did she tell Varadkar, her boss?

“I guarantee you, this will not go away,” said Kelly.

Justice for the Judicial Three.