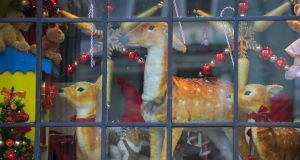 An immovable objectionable and an unstoppable force of argument dominated talk around Leinster House this week.

And when you throw in the election of passionate Irish-American Joe Biden as 46th president of the US, Tuesday’s bruising confidence debate in Tánaiste Leo Varadkar and fresh anxiety over what kind of Covid Christmas lies in store, it’s easy to see how the biggest news of all went unnoticed.

Kerry Senator Ned O’Sullivan made a very important public service announcement in the Seanad on Tuesday.

“We have a lot of mixed feelings about the future with Covid, but whereas one swallow doesn’t make a summer, I think we should also acknowledge that there has been a trend in the right direction of late. There are signs of hope and naturally we all are pinning our hopes on the efficacy of the proposed vaccine. People need hope in their lives, especially coming to Christmas,” began the former primary school teacher turned gents’ outfitter from Listowel.

“And in that regard, Cathaoirleach, I have an announcement which I think will be of major importance to the young people of Ireland. I can state categorically here this morning, without fear or favour – and I have it on the best authority – that Santa Claus is coming this Christmas, Covid or no Covid.”

Ned has connections on high, having waged a celebrated war on seagulls around Kildare Street who “lost the run of themselves”. But when it comes to Santa, he’s not for the birds.

“Santa has made special arrangements. He will be in observance of all the rules and regulations,” he said.

“So, for the young people of Ireland, you heard it here first: Santa Claus is definitely coming.”

Senator Paddy Burke spoiled Ned’s moment by bringing up Santy in the context of the Munster football semi-final, which was not won by Kerry.

Paddy is from Mayo, so he was not being bitter.

Environmentalists find a friend in war on rhododendron

Vindication for the Healy-Raes on the “rowdydundun” question from Friends of the Irish Environment (FIE), not normally considered allies of the Kerry TDs, who at best might be described as climate-agnostic.

The Healy-Raes have fought a long campaign against the infestation of large tracts of Kerry countryside by the invading foreign species, which may look magnificent when in bloom but is strangling the native flora and fauna.

When a rhododendron takes root it clings to the soil like Donald Trump to the Oval Office. It is highly invasive.

There was much hilarity when Michael Healy-Rae made a speech in the Dáil three years ago calling for the army to be drafted into Kerry to tackle the evergreen menace.

This week, FIE called for a Covid-19 type “track and trace” system to control the spread of this “beautiful and picturesque death warrant” for the Irish countryside.

Tony Lowes of FIE says rhododendron, which is toxic to mammals, was introduced to ornamental gardens in Ireland in the 18th century. These handsomely robed thugs grow up to 3m (25ft) high, towering over other species and blocking out light with their thick leafy canopy.

“If rhododendron gets into a forest, your forest now has a death sentence hanging over it. Open countryside becomes impenetrable to man and beast,” warns Lowes.

The environmental organisation wrote this week to Green Party Senator and Minister for Biodiversity Pippa Hackett, calling for the speedy establishment of a citizen’s science-based track-and-trace programme.

“We need to identify the first plants before they have the opportunity to spread – just like Covid-19.”

The boot’s on the other (broken) foot

Yet another of Micheál Martin’s Ministers got the order of the boot this week. How many is that now? But, uniquely, Government chief whip Jack Chambers survived.

Chambers, who is also Minister of State for Sport and the Gaeltacht, has been kept on his toes by Opposition TDs furious at losing plum early speaking time slots to Government TDs following a Dáil vote which caused ructions into the early hours at the last sitting before the summer recess.

As a result, the Dublin West TD has not had the best co-operation from the other side of the floor, with scheduling agreements frequently upended at the last minute.

Chambers arrived for work this week wearing a large surgical boot. It seems he was out road-running at the weekend when he felt a sharp pain in his foot. The TD, a law graduate who recently qualified as a medical doctor, knew all was not well and got himself checked out.

He has a broken bone in his foot and will have to wear the boot for another six weeks. Some people have been suggesting the chief whip didn’t sustain the injury while running but that he got it from having to kick some of the more difficult members of the Fianna Fail parliamentary party into line.

Former Green Party leader Trevor Sargent, who is now a Church of Ireland priest in Waterford, was quite the exotic creature when he landed in Leinster House as a first-time TD in 1992. As the first vegetarian TD to encroach on this manly bastion of the meat-and-two-veg brigade, his arrival caused consternation behind the scenes on the catering side of things.

“In those days they didn’t even like fish,” recalls one staffer.

But Trevor was never Brian McNamara’s problem. Master butcher Brian retired his apron and cleaver on Friday after 40 years preparing great big schteaks and every other cut of meat imaginable for the hungry hordes in Leinster House. He came to Kildare Street from the old Hibernian Hotel, going in as a pastry chef and rising to become second head chef at the Oireachtas restaurant. Back in the day, whole carcasses were delivered to the kitchens and master butcher Brian made short work of them.

He fed a dozen taoisigh, but his favourite was Bertie Ahern, who presented him with an achievement award after he notched up 25 years service. Bertie, we hear, was very fond of his sirloin steaks.

After putting in his time in Leinster House, Raheny man Brian is hoping to go on a well deserved post-retirement, post-Covid cruise with Joe, his husband and partner of 25 years.

The inconclusive Friday 13th meeting between the Taoiseach and the party leaders on the vexed question of Supreme Court judge Séamus Woulfe almost didn’t happen when the IT system went down in Government Buildings.

Five leaders (Mary Lou McDonald, Catherine Murphy, Alan Kelly, Richard Boyd Barrett and Mattie McGrath) attended the meeting in Merrion Street while three more (Denis Naughten, Thomas Pringle and Peadar Tóibín) were due to participate via Skype. But while the Taoiseach, Tánaiste and Green Party leader wanted to begin, the others wouldn’t start until the three linking up remotely could be contacted.

It took nearly half an hour for the techies to fix the outage, during which time Leo Varardkar offered to make everyone a cup of tea. Only Mattie McGrath took him up on it, and the Tánaiste left the room and returned with a mug of tea for Mattie.

“He could have slipped me a Mickey Finn. Put anything in it, but he didn’t. Fair play,” Mattie told colleagues afterwards.

Big winners this week were those TDs and Senators from counties with connections to new US president Joe Biden.

A week since his elevation and Louth, Mayo, Wexford and Cork already have claims on the 46th holder of most powerful office in the world. To be on the safe side, politicians from most of the other counties were also anxious to get their good wishes down on the Oireachtas record in the hope that some tenuous link with their counties might yet be unearthed.

It was a bad week for Kerry, losing to Cork in the Championship and then losing to Cork in the race to nab an American president. Nonetheless, Ballybunion, which has had a dreadful year due Covid restrictions, decided to congratulate Joe through remembering Bill Clinton’s memorable golfing visit to the town in 1998.

Some of the locals have decorated the 7ft bronze statue of Bill, commissioned to commemorate his visit, with American flags – and fitted it with a face mask, a la Joe. Propped against the plinth is a sign saying: “Well done Joe. God bless you and God bless America.”

A golf ball has been placed at the foot of Bill’s driver as he prepares to tee-off outside the Garda station on the corner of Main Street and Church Road. This is not the original. Bill’s ball went missing in 2005. In fact, he can’t keep his balls to himself in Ballybunion. Replacements have also been stolen.

The ball in the photograph is a real golf ball, complete with the presidential seal of office, and it was given to local hotelier Joan O’Connor by Clinton after he finished his round.

Minister for Finance Charlie McCreevy unveiled the statue and he was also part of the fourball, along with former tánaiste Dick Spring and Ballybunion club captain Brian McCarthy. Clinton told Golf magazine in 2009 that the Old Course at BallyB is his all-time favourite. “It’s perfectly Irish: beautiful, rough, and a lot like life – you get breaks you don’t deserve, both ways. You just have to keep swinging and know it will all even out.”

At the time of his visit, Clinton was embroiled in the Monica Lewinsky scandal back home and he was accused of taking this trip to Ireland to deflect from the story. In advance of his arrival, in order to avoid any embarrassment, Monica’s hair salon was temporarily repurposed as “the President’s Golf Shop” selling gifts and merchandise.

There was utter pandemonium when president Clinton finally did his walkabout. He was supposed to arrive much earlier, except nobody told the president or his entourage that they were expected in the town. Excited locals, watching his progress from Kerry Airport on TV in the packed pubs, were disgusted when the motorcade turned at Ballyleigh Cross and headed straight for the clubhouse. There was murder. Disgusted locals began drowning their sorrows.

But someone got word out to the links and the president duly materialised to a humongous welcome from the tanked-up crowd, now hysterical and joyously deranged.

There will, of course, be a welcome in Ballybunion for Joe Biden should he wish to visit the Kingdom when he inevitably visits the auld sod, and the invitation is always there too for Bill to play BallyB.

He’ll have to bring his own balls.