Government and public health team at odds on lockdown aftermath

Health experts continue to urge caution, while politicians fret over Christmas and travel 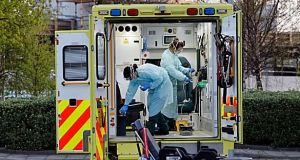 People within the National Public Health Emergency Team believe that had they not been chivvying the Government towards tighter restraints there would have been many more cases, hospital admissions and deaths. Photograph: The Irish Times

Behind the scenes, the old push and pull between the public health experts and politicians is back.

As the Government faces crucial decisions on Covid-19 in the coming days, the National Public Health Emergency Team is openly urging caution and warning about the consequences of not following its advice.

“We really need to follow our public health officials in this area, they are the experts,” Dr Mary Favier, a GP and team member told RTÉ on Monday.

Deputy chief medical officer Dr Ronan Glynn stepped up the warnings that evening, saying the coronavirus situation may be deteriorating.

Ministers and officials know the playbook by now, and the team’s comments were not unexpected.

“I can smell Tony Holohan [chief medical officer] spoiling for a fight,” said one source.

On December 1st, the State’s second lockdown is due to end and, for many, the Christmas season will begin. Before that happens – probably late next week – the Government is expected to lay out how it wants to manage much of Ireland reopening and also the Christmas period. In particular, it will have to explain how it intends to avoid another lockdown in January.

The politicians tend to favour easing the restrictions as much as possible; while the team is a lot more cautious. Differences between the two groups have been well flagged.

Many in Government believe they were bounced into the current lockdown by Holohan when the “Level 3 plus” restrictions were working. That said, the sharp drop in cases in recent weeks (though they have risen in recent days) has not persuaded anyone to propose an early exit.

For their part, people in the team believe that had they not been chivvying the Government towards heavier restrictions there would have been many more cases, hospital admissions and deaths.

In fact, there has been what one person involved in the process calls a “high degree of alignment” between the team and Government during preliminary discussions. The problem is that as the points of decisions approach and issues crystallise, old dividing lines are becoming apparent.

The coming days are crucial for post-Level 5 reopening and the plan for December, as the Government wants to have a strategy settled by the middle of next week. Minister for Health Stephen Donnelly and his officials are due to meet the team on Thursday. There is some suspicion in Government that the team has flogged the recent increase in cases for all it’s worth in order to strengthen the case for caution.

A source close to the team’s thinking disputes this: “They’re genuinely spooked by it.”

This week’s embarrassing climbdown over the proposed – and then abandoned – ban on takeaway pints has not exactly strengthened the Government’s hand. There are more difficult issues ahead and answers will be needed soon.

When and what is allowed to open? Do we go to Level 3 immediately, but keep pubs and restaurants closed? Is there a two-phase reopening, with a Christmas lull for the ban on home visits? How should emigrants be dissuaded from coming home?

Sources on all sides of the argument concede that the toughest political questions will be on travel and pubs, both central parts of the Irish Christmas that the team has and will continue to call for tough restrictions on.

People in Government bridle at these interventions, insisting what happens with pubs and travel are decisions for politicians to make.

Another source, close to the public health experts, acknowledges the tactic of trying to set the terms of the debate to come with Government.

“They’re trying to line the pitch,” he says.