‘Delaying would pose too great a risk’: How Ireland landed in Level 5

For the first time, a full account of what happened in Nphet meetings can be revealed 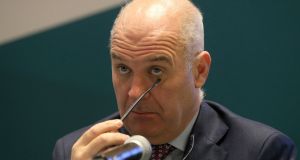 Much has been written about the crucial day in October when chief medical officer Tony Holohan returned early to his job and dramatically convened an emergency meeting of the National Public Health Emergency Team.

The abrupt call for a nationwide move to Level 5, the highest in the Government’s Covid-19 framework, shocked the country and fundamentally reset the relationship between politicians and public health officials.

The level of anger inside the Government was made abundantly clear when Tánaiste Leo Varadkar appeared on RTÉ’s Claire Byrne Live and said the proposed measures were not thought through and had been landed on Ministers.

While the drama played out mainly on the political stage, there were questions around what exactly happened that weekend to bring about this sudden and unexpected escalation.

For the first time, a full account of what happened inside those key Nphet meetings can be revealed.

Opening the meeting at midday on Sunday, October 4th, Holohan first took a moment to communicate his “deep appreciation for the excellent work” of his deputy Dr Ronan Glynn during the former’s leave of absence, new minutes of the conversation show. He also thanked the rest of the team for their dedication. It was made clear at the beginning that the meeting had been called to reach a consensus around whether additional restrictive measures were needed “at a national level” given concerning trends in the days before.

Holohan, the chairman, “reminded” the team that the modus operandi had always been to weigh the status of the disease against three core priorities: the protection of the most vulnerable, the continued resumption of non-Covid health and social care services and the need to protect the ongoing delivery of education and childcare. He asked those present to keep this in mind throughout the conversation they were about to have. In all, 24 counties had an increasing 14-day incidence rate, according to presentations that were given.

It was Holohan who posed the question: is a national approach now needed as opposed to the county-by-county restrictions?

“Nphet agreed that a national approach is now warranted,” the minutes state.

Then Holohan asked: is a higher level of restrictions needed? There was a discussion on the merits of Levels 3, 4 and 5, and the team concluded that “the application of Level 3 or Level 4 measures at a national level would not achieve the necessary outcome”.

Level 3 would restrict restaurants and bars to takeaways and outdoor service to a maximum of 15 people, while Level 5 would mean only takeaway services for restaurants, closure of non-essential retail and restrictions on people to within 5km of their homes.

“At this time, a graduated approach will not have a sufficient or timely impact on the trajectory and scale of the disease, leaving the core priorities vulnerable, and likely resulting in the application of Level 5 measures as mitigation,” Holohan said.

In a stark moment, the team agreed that moving to Level 5 was “the only opportunity to get the disease back under control”, notwithstanding the impact it would have on families and businesses.

The meeting wrapped up. Hours later the news would break in a series of leaks to journalists. The political fallout was swift. Members of the Cabinet and officials privately condemned the move and said they felt blindsided.

But the public health officials were spooked by the modelling, which projected up to 2,300 cases a day within four weeks and a rise in community transmission.

The leak of the information would become a huge part of the story that week and led to some hand-wringing at the next meeting of Nphet on October 8th.

“The chair stated that the content leaked to the media on the evening of October 4th precipitated a series of events that ultimately prevented Nphet’s recommendation from receiving the confidential consideration that it deserved. The chair stressed that whoever was responsible for that leak does not share Nphet’s objectives for dealing with the Covid-19 pandemic.”

Despite the public acrimony, Holohan said he was “reassured by the substantial response that can already be perceived across government, the media and general public.”

The team met again on October 14th. By this stage the whole country had moved to Level 3. At this meeting, the fears of the HSE became evident. They said that “Ireland now has an acute system that is operating close to capacity” while also drawing attention to the impending flu season and staff absences.

The meeting heard that despite the Level 3 measures, there had been only a slight decrease in traffic. Furthermore the numbers on public transport remained much the same and many people were still going into work, and there had been little change in spending habits. Overall, there didn’t appear to be a world of difference in how the public was acting.

More importantly there was still too much movement between counties. While it was too early to know the full impact of Level 3, the team was not happy.

“The picture is one of a rapidly deteriorating disease trajectory nationally that could potentially compromise our ability to protect the core priorities,” a minute of the meeting states. And so another question was posed by Holohan: do we need more time to see if Level 3 is working?

Too great a risk

It is interesting to learn that some of those present felt that “with full compliance and enforcement, Level 3 could potentially be sufficient”.

Yet on balance the team concluded that “delaying escalation would pose too great a risk”. Some members of the team said they believed that if this was the case, Level 4 may be enough.

But again, it all came back to the three “core priorities” of the vulnerable, non-Covid healthcare and education.

A specific part of Level 5 carried “significant weight” in Nphet’s mind: the 5km travel limit. An unnamed member of the group asked what would be the cost of delaying such an intervention by a number of weeks.

The answer was that a two-week delay, where the reproductive number was at 1.4, could lead to an extra 24,000 cases, 140 admissions to intensive care, some 1,000 hospitalisations and ultimately 120 deaths.

What followed was a weekend of intense deliberation between the Government, Nphet and the HSE. What emerged was, of course, the six-week Level 5 lockdown the country finds itself in until December 1st.