Micheál Martin pledges jobs initiative as he is endorsed as Taoiseach 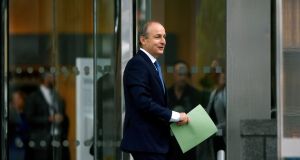 Fianna Fáil leader Micheál Martin was endorsed as Taoiseach by the Dáil by 93 votes to 63, with three abstentions, having secured the support of nine Independent TDs .

Hours later, the Dáil’s support for the appointment of his Cabinet was slightly less emphatic, with 91 votes in favour and 66 against, following disappointment among west of Ireland representatives about the lack of a senior Minister from there.

Marking the formal end of so-called Civil War politics, Saturday also marked an unprecedented third term in office in a row for Fine Gael and the return of a greatly expanded Green Party to Government.

In his opening words as the Dáil sat in Dublin’s Convention Centre, Mr Martin said that the Government faces “the fastest-moving recession ever to hit our country”, which can only be overcome by acting with “urgency and ambition”.

Saying that the Coalition partners “do not and could not be expected to agree on everything”, Mr Martin added: “We have been able to agree on core democratic principles and on a balanced and comprehensive programme.”

After he returned from Áras an Uachtaráin, where he received his seal of office, Mr Martin was followed into the Convention Centre auditorium by his new Government team of 14 senior Ministers and three “super juniors” who will sit at Cabinet but will not have a vote.

The Taoiseach said a new investment-led jobs and recovery initiative would be announced next month. A special Cabinet committee will be established for this “in the coming days”.

And he said there would be a “major reconfiguration of central elements of how government is structured” and works. He stressed that Government departments would have to “work across normal boundaries”.

Tánaiste Leo Varadkar said Civil War politics ended a long time ago, but they had now “ended in our parliament”.

He pointed to Fine Gael’s unprecedented third term in office in a row as an opportunity to protect what had been delivered and improve on mistakes.

Mr Varadkar took a swipe at Sinn Féin, who had claimed there was “no change” with the new Government. He said that for Sinn Féin change meant their ministers in the back seats of ministerial cars. He said the party had been willing to go into power with either Fianna Fáil or Fine Gael and probably both.

“That is what change means to Sinn Féin, but of course when the Green Party does that it is a betrayal.”

‘More of the same’

Sinn Féin leader Mary Lou McDonald, who had earlier been nominated for Taoiseach by party finance spokesman Pearse Doherty and Galway West TD Mairéad Farrell, said that “this will be a Government of more of the same”.

The “ancient quarrel between Fianna Fáil and Fine Gael has long since descended into a race for power and privilege in this State”, she said, adding that there was “not a whisper” about the North and Irish unification in the programme for government.

Green Party leader Eamon Ryan said the Government must be enterprising, “willing to take risks, make mistakes and fail because that is the only way we will succeed”.

They had to invest in a State “that will not hammer a public servant who makes a creative decision that goes wrong, because we can learn from that mistake”, he said.

Labour leader Alan Kelly said the proposed appointment of 20 Ministers of State was too many, especially at a time when money is tight.

He did not think taxpayers would appreciate “ such lavish and indulgent behaviour”.