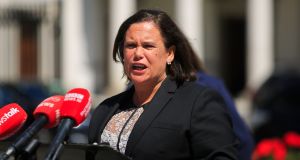 A new government has been formed, but debate lingers about whether it best represents what people voted for. Was this year’s general election a vote for radical change? Or for incremental reform?

Sinn Féin’s isolation in government-formation talks, despite winning most first-preference votes, has added to the discussion about who is entitled to rule.

There is comfort at least in knowing that we are not alone in wrestling with the concept of legitimate government. In his book Legitimacy: The Right to Rule in a Wanton World, the Harvard political scientist Arthur Isak Applbaum explores the complexity of “the moral right to rule”.

A common response is that legitimacy is conferred by voting, and when you mark the ballot paper you consent to whatever outcome emerges. But this argument doesn’t stand up, says Applbaum, as the “background conditions of choice” are already set.

For Applbaum, the issue resonates close to home with the US presidential election scheduled for November 3rd. The last election was overshadowed by controversies around voting irregularities and Russian interference, and, although Donald Trump may have a legal right to make executive orders, his moral right to do so is now widely questioned.

Applbaum sees the Trump presidency as part of a bigger phenomenon that already encompasses Brexit Britain and risks engulfing other European states. The greatest threat to established democracies, he argues, “is neither inhumanity nor despotism but wantonism, the domination of citizens by incoherent, inconstant, and incontinent rulers”.

The test of a government’s legitimacy, Applbaum believes, has more to do with character than composition. Although some election procedures “are worse than others”, there is nothing to say that a unity government, for example, is “a priori more democratic” than a less inclusive coalition, he says.

In favour of the former is “the worry that the arguments of citizens who voted for parties excluded from the coalition will not be heard and their claims of justice will not be met. What counts against a broad coalition is if inclusion would require denying or compromising on the rights and liberties of others, or lead to instability and paralysis, or generate incoherent and incontinent choices that fail the test of reason-responsiveness.”

“The bumper-sticker version of my argument is that a government that cannot govern itself cannot legitimately govern others,” explains Applbaum, today’s Unthinkable guest.

In broad terms, how do you define a legitimate government?

“A normative theory of legitimacy – that is, a theory of the moral right to rule – must answer Jean-Jacques Rousseau’s question of how persons can genuinely be free if everywhere they are subject to coercive law. My answer attempts to be precise about the standard democratic answer that persons are genuinely free only when they collectively govern themselves.

“When our government dominates us or damages our capacity for autonomy, it fails to make and keep us free individual agents, and therefore threatens us with a kind of tyranny. It’s as if we are being ruled by a hungry tiger.

“When our government can’t or won’t combine the autonomous wills of its citizens in ways that constitute a group agent that itself makes reason-responsive choices, it fails to be a free group agent, and therefore threatens us with another kind of tyranny. It’s as if we are being governed by an inconsistent or incontinent toddler.”

Why is consent not a sufficient criterion for legitimacy? There is an argument that says if you voluntarily take part in a vote you have to accept the outcome.

“Isn’t it odd that we are very demanding about what counts as genuine consent in our everyday interactions but extremely lax about what is required to consent to be governed for our entire lives by coercive law? ‘No’ to sex always means no, and ‘yes’ to sex doesn’t always mean yes. Yet when it comes to political obligation we make all sorts of inferences and interpretations about what counts as genuine consent that would be laughable if invoked as a defence against the charge of rape.

You say the greatest danger to the legitimacy of contemporary democracies is the threat of wantonism. Why so?

“Wantons are moved either by their strongest impulses or by the vector sum of their impulses but have no second-order view about [their desires]. Imagine the terror of being under the coercive control of a wanton, who, in failing to reflect and deliberate, fails to be self-governing agent, and subjects you to his strongest momentary impulses. Do any current world leaders meet this description?

“Fortunately, it is rare for a democracy to elevate an individual wanton to high public office. Unfortunately, collective wantonism threatens us continually in the form of simple-majority rule.

“To borrow an example from my colleague Christine Korsgaard, consider a bag containing a dozen mice. Will the bag move? Yes: it will follow the vector sum of a dozen separate impulses. Will the bag act? No: the bag itself isn’t an agent capable of action, even if, on some generous account of animal agency, each mouse is a self-governing agent.

“When we are ruled by the vector sum of individual preferences, without procedures and institutions that privilege deliberation and reason-responsiveness, then incoherent, inconsistent and incontinent misrule cannot be held back.

“What are examples of such procedures and institutions? A written, rights-based constitution, an independent judiciary, a professional civil service, and strong legislative norms of reason-giving and fair play help, but there can be no guarantees.

“For just one example of how faulty deliberative procedures can lead to failures in collective self-governance, and so to wantonism, consider the case of the Irish backstop, just one of several manifestations of incoherence in the circus of misrule known as Brexit.

On Brexit, the House of Commons is just a bag of 650 Korsgaardian mice, incapable of creating a coherent unity out of multitude

“Among three policy choices-departing from the EU customs agreement, maintaining an open border between Northern Ireland and the Irish Republic, and maintaining an open border across the Irish Sea, any two can be realized, but not all three. Yet there is majority support in the UK parliament-albeit different majorities-for each of these three measures, thereby supporting a practical impossibility.

“On Brexit, the House of Commons is just a bag of 650 Korsgaardian mice, incapable of creating a coherent unity out of multitude. This not merely a regrettable inefficiency or inconvenience. It is, on my account, a failure of legitimate government.”

Unless you have a unity government, a democratic election will produce an administration that excludes certain parties. Is that legitimate?

“I understand this is a fraught question for Ireland right now, since Sinn Féin, the party that won the plurality of first-round votes, is being excluded from the governing coalition. As long as there is underlying political disagreement among citizens, however, there is no form of democracy that can deliver unity on substance.

“Suppose we had a direct democracy, so each citizen had a seat in the legislative body, and each citizen participated in the executive functions of governing, so every citizen was a member of a unity government of all. There is no principle of democratic legitimacy that holds this form of government up as the gold standard.

“All citizens, including those who voted for Sinn Féin, are entitled to a fair hearing. But no one is entitled to fractional legislative victories or fractional preference satisfaction. That would treat the Dáil as a bag of mice.”