Concerns in relation to programme for government flagged by Independents 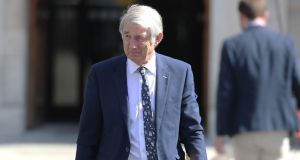 Michael Lowry is one of nine Independent TDs who voted for Micheál Martin as Taoiseach. Photograph: Nick Bradshaw

A number of Independent TDs who voted for Micheál Martin as Taoiseach have warned that their support for the new Government is not guaranteed in future votes.

This would give the Government the support of 93 TDs, far above the majority of 80 which is needed in the Dáil.

Independent Limerick TD Richard O’Donoghue said he would support the Government on a case-by-case basis.

“I believe the country needs a government. As for the make-up of the Government, I am not in favour of the full programme for government. We need a government that will last but my major concern is around the implementation of green policies. From a rural point of view, it could absolutely destroy rural Ireland.”

Mr O’Donoghue said he had commitments from Mr Martin that he would be “listened to” and that his constituents “will have a voice”.

Louth TD Peter Fitzpatrick said he held a number of one-on-one meetings with Mr Martin but also said his support was conditional.

“I found Micheál Martin to be very honourable and of the three leaders I found him the most accomplished and the one who listened most thoroughly.” Mr Fitzpatrick said further discussions with Mr Martin were planned.

Sligo-Leitrim TD Marian Harkin said she was “loaning” her vote to Mr Martin.

“The country is in the teeth of Brexit and people are anxious about a second wave of coronavirus. People want certainty. We are 140 days at this. We need to get on with it. I am prepared to give an opportunity to see what will be delivered.” She also said her support would be given on a case-by-case basis.

Independent TD for Galway East Seán Canney said he would be staying in opposition.

“I do not believe that the Fianna Fáil, Fine Gael and Green Party programme for government will deliver for my constituents,” he said.

Rise TD Paul Murphy said that in opposition he would continue to raise issues such as the mooted increase in the pension age.

“On the pension age, the Government is kicking the increase to 67 years down the road but it is clear that it will not reduce it to 65 years and Fine Gael will continue to push for it to increase to 67 and then 68 years.

“Rise and the socialist left will not only make speeches of opposition in the Dáil. We will build movements of opposition on the streets and in communities and workplaces to defeat the incoming Government’s plans for a massively hiked carbon tax and to demand the building of public housing and construction of an Irish NHS. ”

1 How fraudsters used lockdown to lure Irish victims into boats and caravans scam
2 Miriam Lord: Minister for Agriculture tries to get himself out of the manure
3 Garda detective charged with making death threats against ex-partner
4 Martin criticises ‘over-focus’ on Border poll ahead of Foster meeting
5 Coronavirus: One more death and 24 new cases reported in the Republic
Real news has value SUBSCRIBE