Fianna Fáil leader Micheál Martin has been elected Taoiseach by 93 votes to 63, with three abstentions, in a historic Dáil vote which has taken place in Dublin’s Convention Centre. Video: Oireachtas TV 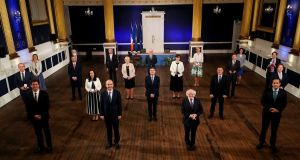 Fine Gael’s Helen McEntee has been promoted to the position of Minister for Justice.

Fine Gael’s Paschal Donohoe remains on as Minister for Finance as expected, with Fianna Fáil’s Michael McGrath becoming Minister for Public Expenditure and Reform. Barry Cowen will become Minister for Agriculture and Marine while Fianna Fáil deputy leader Dara Calleary becomes Minister of State at the Department of the Taoiseach and Government Chief Whip.

Dublin West TD Roderic O’Gorman has been made Minister for Children, Disability, Equality and Integration.

Green Party senator Pippa Hackett will be Super Junior Minister in Agriculture with responsibility for Land Use and Biodiversity.

A number of high profile Fianna Fáil TDs who had been tipped for potential seats at the Cabinet table - including Jim O’Callaghan, Anne Rabbitte, Jack Chambers and Thomas Byrne - were not promoted. Some may be named Minsters of State next week.

Announcing the names of the new Cabinet members in the Dáil on Saturday evening the Taoiseach, who earlier accepted his seal of office from President Michael D Higgins, also said Paul Gallagher would be the new attorney general.

“In the coming week I will propose further deputies to serve as Ministers of State and outline a series of special responsibilities to be assigned to them. These will be focused on delivering specific priorities,” he said.

The new Fianna Fáil, Fine Gael and Green Party Cabinet was approved in the Dáil by 91 votes to 66 with one abstention, two fewer than supported the appointment of Mr  Martin as Taoiseach.

Some TDs  criticised the failure to appoint more Ministers from the western seaboard. Independent TD Peadar Tóibín said there was no Minister from Donegal to Clare and it was clear the Government was Dublin-centric.

Independent TD Richard O’Donoghue -  who had supported Mr Martin’s nomination as Taoiseach -  reversed his vote and cast his ballot against the Cabinet.

Independent TDs Carol Nolan and Mattie McGrath, who had abstained in the vote for Micheál Martin as Taoiseach voted against the appointment of the Cabinet.

In his first speech after being elected Taoiseach on Saturday afternoon, Mr Martin pledged that “recovery and renewal” are at the centre of the new Government’s priorities.

Addressing the Dáil, assembled in the Convention Centre in Dublin rather than Leinster House due to social distancing requirements, Mr Martin said the coronavirus pandemic “is the fastest moving recession ever to hit our country and to overcome it we must act with urgency and ambition”.

He said there are “nearly 900,000 of our people wholly or partly relying on special pandemic payments”. There was no question about the Government’s most urgent work, which was to “move forward rapidly to secure a recovery to benefit all of our people”.

He acknowledged the work of the outgoing government and “especially Minister for Health Deputy Simon Harris and outgoing Taoiseach Deputy Leo Varadkar”. “But there is much more that we can and must do to help our society and our economy to recover.”

The Dáil has now adjourned until Tuesday.

Ministers at a glance:

Tánaiste and Minister for Enterprise, Trade and Employment - Leo Varadkar.

Minister for Agriculture and the Marine - Barry Cowen

Minister for Social Protection, Community and Rural Development and the Islands - Heather Humphreys.