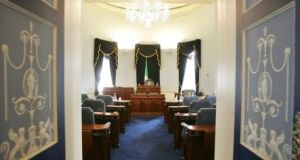 The inclusion of nine women among the Taoiseach’s eleven nominees to the Seanad has been welcomed by women’s groups though the absence of a person of colour from the line-up is described as a “missed opportunity”.

The broadest welcome appears to have been for young Traveller activist Eileen Flynn (30) who had missed out on a Seanad seat by two votes when she stood in March. From Ballyfermot, Dublin, she lives in Ardara, Co Donegal, with her husband and daughter, and is the first Traveller woman in the Oireachtas.

A campaigner for many years, not only on Travellers issues, she has been vocal in campaigns to repeal the eighth amendment, for marriage equality, on housing rights and to end direct provision.

Speaking on RTÉ radio on Sunday she said she described her nomination as “phenomenal”.

She said she wanted to work for marginalised groups everywhere, though would never assume she could be their voice.

“I can’t speak for black people because I am not black,” she said. “‘Nothing about me, without me’ is something I have always said...But I’d like to work with and bring people into the Seanad and let people speak for themselves…I may not be a voice for every 40,000 Travellers on the island but what I will do is be a voice for equality and I’ll try my very best to do the right thing.”

The Green Party’s Clare county councillor Róisín Garvey, who was involved in the party’s negotiations for Government, is the ninth new woman senator.

The director of the National Women’s Council, Orla O’Connor, said it was “positive” the Taoiseach had responded to the call for a significant numbers of women among his nominations, given that just 22.5 per cent of TDs were women and 30.6 per cent of elected senators were women.

“And of course we are absolutely delighted by the nomination of Eileen Flynn who has been such a strong, important activist on issues that affect women predominantly – like housing, poverty and disadvantage.

“Eileen will be an important voice on diversity. But we are disappointed that there remains no woman of colour in the Oireachtas at a time when we know racism is so present throughout society.”

Human rights commissioner and founder of Akidwa – the migrant women’s network – Salome Mbuga said she was “disappointed an opportunity to make the Seanad more diverse, has been missed.

“There are so many issues, affecting so many people who still do not have a direct voice in the Oireachtas – issues like racism, access to work and education, direct provision. It is a missed opportunity”.

1 Coronavirus: Non-essential travel from US set to be banned within days
2 ‘Our hearts are broken’ – implications of fresh lockdown sink in
3 Google to roll out software fix to remedy issue with Covid app
4 Coronavirus: No additional deaths in State but 68 new cases
5 Portlaoise locked down: ‘Our older clientele haven’t been back’
Real news has value SUBSCRIBE