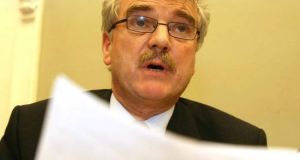 Finian McGrath: he says he now supports the Government campaign to encourage take up of Gardasil after previously opposing the vaccine

Minister of State for Health Finian McGrath has called the Irish Cancer Society to express his “unequivocal support” for the HPV vaccine used to prevent cervical cancer.

The Independent Alliance Minister performed a U-turn at the weekend, saying he now supported a Government campaign to encourage take up of Gardasil after previously opposing the vaccine.

“Minister McGrath called the CEO of the Irish Cancer Society at lunchtime today, and outlined his unequivocal support for the HPV vaccine,” a spokeswoman for the society confirmed on Monday.

Mr McGrath had angered Government colleagues at the weekend when he stood over previously expressed opposition to the vaccine.

Speaking on Monday, Minister for Health Simon Harris said he had been “very disappointed and frustrated” by Mr McGrath’s comments, which he described as “unfortunate, ill-judged and not based in fact”.

However, he said he was pleased Mr McGrath had acted swiftly to rectify the situation, and expressed confidence in the Independent Alliance Minister’s ability to do his job in the Department of Health.

Mr McGrath was branded “irresponsible” by Labour’s Alan Kelly as his comments came just days after a new campaign to promote a vaccination programme for schoolgirls at second level.

Meanwhile, it has emerged a number of Government TDs have brought constituents’ concerns about the HPV vaccine to Mr Harris recently.

Former ceann comhairle Sean Barrett of Fine Gael asked Mr Harris in May if he was concerned that some girl who received the vaccine “appear to have had serious side effects”, Oireachtas records show.

Mr Barrett told The Irish Times on Monday he tabled questions to get the up-to-date position when his office was contacted by parents. “I’m not sufficiently qualified to have a definitive opinion on a medical matter. If something is allowable I assume that the appropriate tests have been done, but that doesn’t prevent individuals having concerns one way or another.”

Tony McLoughlin, who represents Fine Gael in Sligo-Leitrim, asked Mr Harris in January if he proposed setting up an independent inquiry to investigate the claims of parents of children “affected by the Gardasil vaccine”.

In a written question to Mr Harris, Mr McLoughlin said “more and more” parents were contacting their public representatives.

He said they wanted to inform the Department of Health, the Department of Education and the HSE “regarding the extent of these previously unidentified health problems of their children who pre-vaccination had no had no medical conditions requiring constant medical intervention”.

The backbencher told The Irish Times on Monday the Minister had assured him the expert advice was that the Gardasil vaccine was safe.

“I spoke to the Minister privately about it because constituents have serious concerns and they are very genuine people. The Minister has assured me the expert advice is that it’s safe,” Mr McLoughlin said. “But it’s unfortunate that there are some people who have been affected by it. This is what they are saying to me.”

Meanwhile, Minister for Children and Youth Affairs Katherine Zappone has defended the stance taken by Mr McGrath. She said Mr McGrath had made it clear he now supported the Government’s policy on the use of the vaccine but was entitled to express the concerns of some parents who were opposed to the vaccine.