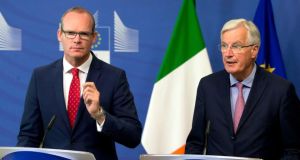 Coveney-Barnier talks: Ireland and the commission are disappointed with the UK’s lack of detail. Photograph: Virginia Mayo/AP

“Ireland’s concerns are the union’s concerns, and all member states and EU institutions are fully united in this regard,” Michel Barnier told Brussels journalists and Minister for Foreign Affairs and Trade Simon Coveney on Monday.

It is by now a familiar refrain, but nonetheless reassuring to Mr Coveney who was in Brussels for the day for consultations with the EU’s chief negotiator, Mr Barnier, the European Parliament’s Brexit representative, Liberal MEP Mr Guy Verhofstadt, Irish MEPs Matt Carthy (SF), Brian Hayes (FG), and Luke Flanagan (Ind), and Danuta Hubner the parliament’s European People’s Party chair of its constitutional affairs committee.

The reassurance, it is expected, will be reflected in detail in the Commission negotiating paper on Ireland expected to be published in the next week, and whose content was certainly central to the Barnier-Coveney working lunch.

There is disappointment from both the Commission and the Irish that the UK paper, published two weeks ago, was long on aspirations but short, particularly, on the detail of how to preserve the many elements of all-Ireland co-operation which were enshrined in the Belfast Agreement.

With continuing strong pressure from the UK to move discussions on to the second phase future-relationship talks, Mr Coveney said that he had a “very strong sense” that the task force believes more progress can be made on phase-one issues ahead of the move.

On the Border issue, Mr Coveney said it was clear that UK aspirations to a frictionless border “were not credible answers” to the problem, without threatening the integrity of the single market. He welcomed the progress made on safeguarding the Common Travel Area in the third round of talks last week, and said that apart from some detail he was not aware of significant blockages to agreement on the issue.

Some progress continues to be needed to flesh out how the Belfast Agreement North-South cooperation, embedded as it was in EU legislation, would survive Brexit.

Mr Barnier, speaking to journalists in the Berlaymont after their meeting, reiterated that progress had been made in the Irish strand of the third round of talks notably on the Common Travel Area, with the need to continue discussions on the issues associated with North/South dialogue.

“The decision to leave was the UK’s decision not the EU’s decision or Ireland’s and we respect the decision,” he said, but made clear that the challenge would be “that any solution we look at it will have to be fully compatible with union law and the single market.”

Mr Coveney expressed his gratitude for the prioritisation of Irish issues by the task force as one of the three issues to be tackled in the first round of talks. He stressed that “Ireland is in a uniquely vulnerable position as a small country that has a historically interwoven relationship with Britain”.

The challenge, he said, was “how do we maintain what a peace process has delivered on island of Ireland which is effectively an invisible border 500 km long with 260 road crossing and has nearly two million cars crossing it every month”.

Mr Hayes said he was impressed by the Minister’s appreciation of the detailed and constructive role being played by the European Parliament in the talks. The parliament has the right to give its opinion on any settlement.

Mr Carthy pressed the Minister on the need, as he put it, to “toughen up” its negotiating position and to campaign for “special designated status” for the North, in effect the North remaining part of as many of the EU institutions and programmes like the customs union post-Brexit. The UK has been insisting that there will only an all-UK outcome.

There was also the need, he argued, for a financial support package for those who would be hit by Brexit, notably in the agrifood sector.