Minister in talks to ‘scale up’ plans to tackle homelessness 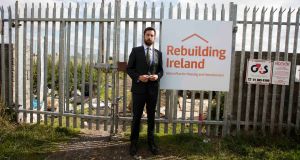 The Minister for Housing has said he is in negotiations with Minister for Finance Paschal Donohoe about plans to “scale up” their “ambition” in terms of moving homeless families to more permanent accommodation.

However, Eoghan Murphy said “there’s not much I can say at the moment because we’re at that sensitive stage of negotiations”.

In a few weeks, he said he will be announcing his review of “Rebuilding Ireland, ” a plan which is “working”. Mr Murphy said his Department will be discussing funding and resources allocated to convert hubs into housing “as quickly as possible.”

He also told RTÉ’s News at One said they are looking at a “couple of other solutions” to the problem as well. “We know there are a number of vacant homes that are not in use. We need to find ways to bring them back into use as quickly as possible.”

“There is a lot of vested interests working in this area. If I was to start flagging things to you now that we’re trying to do in the next two, three or four weeks they would rally against, potentially, trying to stop the things that we want to do, so I have to be careful.

“I have been given this huge responsibility. It’s probably the most important thing I’ll ever do in public life, is to hold the office that I hold now . . . People talk about Brexit as the challenge or the crisis of our times, it may be, but it may not be because you don’t know how it’s going to transpire. This absolutely is.”

Still remember where I was the moment I heard Diana had died. Hard to believe it's twenty years. #Diana20Years

His comments came after a young girl, who is homeless, was interviewed on Morning Ireland. “It’s hard to fit in and find someone who will accept you and your troubles,” she said. “If you get to the stage where you can open up about this situation, it’s still the sense . . . will they still be your friend or will they find you scum?”

The girl said if she could send a message to Government it would be: “Give us our home, please. We need it. We need it as soon as possible.”

In response, Mr Murphy said, “I think the piece that was broadcast this morning is probably one of the most important contributions to this debate that we’ve heard in the past number of months.”

Meanwhile, Mr Murphy said it’s unfair to criticise the Taoiseach over a tweet about Princess Diana.

Leo Varadkar has been heavily criticised on social media for the message about her death, on a week when three people who were homeless died in Ireland.

He said he was in “constant contact” with Mr Varadkar about “each individual death and their circumstances”.

He said it was unfair to criticise the Taoiseach over the use of “one particular communications channel”, when he “obviously communicated his sympathies and spoke about this at a couple of public events last week”.

Mr Murphy said he is working with the Government to try to move families from hotels to “permanent, sustainable and long-term” accommodation.

Paul Reid, chief executive of Fingal County Council, in north Dublin, said new families are looking for assistance faster than existing families are being moved out of emergency accommodation.