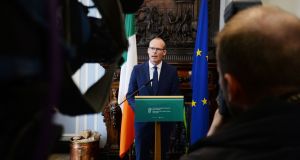 Minister for Foreign Affairs Simon Coveney: said the Government was planning to introduce legislation that would allow gardaí give evidence to the inquest into the 1976 Kingsmill massacre in Armagh. Photograph: Alan Betson

Politicians must “make things happen” if there is to be any prospect of restoring Stormont, Minister for Foreign Affairs Simon Coveney said in Armagh on Tuesday evening.

Mr Coveney has spent a number of days in Northern Ireland trying to establish whether resumed political talks stood any chance of success and whether the two main parties, the DUP and Sinn Féin, are open to making compromises to end the political stalemate.

It was a partly a family break, during which he attended the women’s rugby world cup final in Belfast on Saturday and also spent time in Derry.

He met the Secretary of State for Northern Ireland, James Brokenshire, and Sinn Féin’s northern leader Michelle O’Neill at the game, where he took some soundings on the prospects of resumed talks leading to the reinstatement of the North’s Executive and Assembly. He met DUP leader Arlene Foster in Armagh on Tuesday evening. He also discussed Brexit.

Mr Coveney also met relatives of the 10 Protestant workmen murdered by the IRA in Kingsmill in south Armagh in 1976. The families have called for the release of southern security files relating to the Kingsmill massacre.

Just before that meeting with the families in Armagh on Tuesday evening Mr Coveney told reporters that gardaí already have passed on all relevant files to the coroner conducting the inquest into the Kingsmill killings.

Reports that there were files somewhere in Dublin that could be handed over were “simply not true, that is my understanding”, he said.

Mr Coveney also said the Government was planning to introduce legislation that would allow gardaí provide evidence to the Kingsmill inquest by delivering such testimony in an Irish court.

Mr Coveney said this was “very new”. He added: “I am not sure it has been done before, but I think it is certainly evidence of the fact that the Irish Government wants to be as helpful as we can. The families that have lost loved ones have been through a tortuous period really in trying to get to the truth. I can promise you that the Irish Government wants to assist them in every way that we can.”

The DUP leader Arlene Foster also attended that meeting. It is understood that on the margins of the meeting she and Mr Coveney further explored whether resumed negotiations would have any chance of getting Stormont back up and running.

The British and Irish governments currently are trying to prepare the ground for the resumption of talks which are tentatively due to start next week. London and Dublin, however, are uncertain about whether the DUP and Sinn Féin are willing to make the necessary compromises to create a real possibility of ending the political deadlock.

Asked would those talks go ahead next week, Mr Coveney said, “We have to wait and see.”

And, further asked was he optimistic about Stormont being reinstated, Mr Coveney said, “I think it is important to be optimistic. That’s my job. We need to make things happen. We need to work with all sides to try and find a positive outcome here.”

He added: “There are enough pressures at the moment in Northern Ireland and the island of Ireland as a whole in the context of Brexit negotiations and the many other challenges that we face together without the ongoing absence of an Assembly and Executive representing the interests of the people here. For lots of reasons we need to make this happen and we will be doing everything we can to help that process.”

On Monday Mr Coveney met academics from Queen’s University and Ulster University in Belfast to discuss the implications of the UK quitting the European Union.

On Tuesday morning he addressed the Northern Ireland Chamber of Commerce and Industry in Belfast where he said northern business leaders should use their influence to try to prompt the British government towards a soft Brexit.

“The best way to ensure we preserve the kind of border arrangements that have served us so well is for the UK and Northern Ireland to remain in the customs union and single market,” he said.

“Businesses in Northern Ireland should not underestimate their influence at this time,” said Mr Coveney, while adding that he hoped the views he heard from business leaders would “also resonate in Belfast, London and Brussels over the coming weeks”.

Mr Coveney said the “voice of business” was vital in the debate on Brexit and dealing with its impact on Northern Ireland. “And we are at a critical juncture now in terms of making that voice heard,” he said.