Amnesty International, family members and fellow protesters, gathered outside the Egyptian Embassy in Dublin to highlight the four-years that Ibrahim Halawa has been in prison in Egypt. Video: Sean Dunne/Irish Times video team 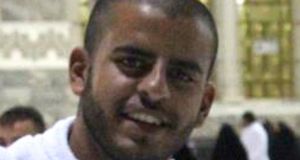 Ibrahim Halawa will have to wait another three weeks for the verdict in a trial over Muslim Brotherhood protests in Cairo in 2013, his lawyers have said. Photograph: Family Handout/PA

Taoiseach Leo Varadkar has been assured by the Egyptian president the case of Ibrahim Halawa will be resolved swiftly once the verdict is known.

The Taoiseach expressed his disappointment at the decision to delay the verdict for a further three weeks and made it clear his priority was to secure the return of Mr Halawa to Ireland as soon as possible.

President Al-Sisi insisted his Government could not interfere in a judicial process but stressed the matter would be dealt with swiftly once the trial was brought to an end.

A spokesman for Mr Varadkar said both the Taoiseach and the Egyptian president looked forward to the matter “being brought to an early and satisfactory conclusion so that they could concentrate on broader and normal bilateral relations between Ireland and Egypt, in areas like trade, tourism and political cooperation, in the period ahead”.

In a statement after the latest adjournment, Mr Halawa’s sister Somaia said: “It is truly upsetting and heart-breaking to constantly keep having our expectations and hopes shattered into a million pieces.

“It is not just Ibrahim’s life that is being played around with but also the entire family’s life. We would ask that our family are allowed some time to ourselves during this difficult period.”

The Minister said he would be discussing the issue with his department to make sure that when the 21-year-old does return “after the most horrific ordeal he’s had over the last number of years that we can support him fully”.

Mr Harris appeared to rule out any Government attempt to push for Mr Halawa’s release before the now delayed verdict.

“We expect Ibrahim Halawa to be returned to Ireland as soon as a verdict is delivered in his trial,” he said.

“We’re extraordinarily frustrated and disappointed as a Government as I’m sure so many citizens in this country are”.

Earlier,Minister for Foreign Affairs Simon Coveney confirmed the case had been adjouned until September 18th.

Mr Coveney said the delay was “very frustrating” but insisted the Government would keep working to ensure Mr Halawa is returned to Ireland.

“This is very frustrating for Ibrahim Halawa and for his family, who were expecting some definitive news today, and I fully share that sense of disappointment and frustration at yet another delay in this long-running case,” Mr Coveney said.

“Nonetheless, we will be continuing to work in support of Ibrahim and his family and doing everything we can to ensure that he is able to return to Ireland as soon as possible once the trial ends.”

The 21-year-old Irish man has been detained in Egypt for four years. Senior officials here believed a verdict would be delivered today and he could be back in Ireland within weeks.

Mr Halawa, from Firhouse in Dublin, was 17 when he and hundreds of others were arrested in August 2013 in Cairo during protests against the ousting of then president Mohamed Morsi of the Muslim Brotherhood.

He has been on trial with 493 others, but the process has been beset by delays, and substantive hearings have only taken place in the past eight months.

No evidence implicating Mr Halawa was presented to the three-judge court.

Diplomatic figures believed the young man would be released today and efforts could be made to bring him back to Ireland.

Ireland’s Ambassador to Egypt, Damien Cole was present in the court to observe proceedings and to hear the verdict.

In a statement, the Minister for Children Katherine Zappone said she shared the disappointment felt by the Halawa family.

Ms Zappone said this had been a very difficult case for the Department of Foreign Affairs but the Government must respect the legal process.