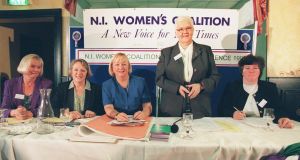 Delia Close, former Assembly members June Morrice and Monica McWilliams, Baroness May Blood Pearl Sagar, who was one of the negotiators during the peace talks, who were involved in the Northern Ireland Women’s Coalition in the 1990s. Photograph: Paddy Whelan

The role of the Northern Ireland Women’s Coalition (NIWC) in helping to bring peace to the region in the late 1990s is being explored in a new BBC documentary series.

The story of the cross-community political party – ‘Peacemakers: Wave Goodbye to Dinosaurs’ – is the first of three programmes exploring the movement from conflict to peace in the North, with the other two films looking at the role of the Peace People campaign movement and the clerics that negotiated with paramilitaries.

NIWC was established in 1996 to address a lack of female representation in the North. Women would not have been at the top table in peace talks at the time if it were not for the NIWC mobilising and fielding 70 candidates in the Forum elections under the slogan “Wave Goodbye Dinosaurs”.

They were “mooed and booed” at by established party politicians but played an integral role in peace talks which culminated in the 1998 Good Friday Agreement.

At a preview screening in the Queen’s Film Theatre in south Belfast on Sunday, one of the film’s contributors, former MP Bernadette McAliskey, is seen telling the filmmakers the story of the NIWC had not been visible, “not because women get written out of history, but because they never get written in”.

Another of the film’s contributors, Irish government representative at the peace talks, Liz O’Donnell, took part in a Q&A session at the QFT afterwards. The former Minister of State at the department of foreign affairs and ex-Progressive Democrat TD told the audience the role of the NIWC cannot be underestimated, including in providing an understanding of the loyalist community. “Everyone else came from a long fixed position on various issues, and from a place of emotional and tribal passion which prevented finding a space where accommodation could be met,” she said. “The women came to help and find solutions, and the Irish government really appreciated their support.”

Director Eimhear O’Neill said the film was enlightening to work on and is a story about “a group of brave women who did speak out”.

“Their story is part of a large tapestry of activism spanning several decades by women across Northern Ireland,” she said. Among the founding NIWC members at the preview was Baroness May Blood. On the political deadlock at Stormont at present she said there was no need for a new generation NIWC, just for the current crop of politicians to get on with the job.

“What we need is for our politicians to do what they get paid to do and that is to come to an agreement for Northern Ireland,” she added. “Over 30 per cent of the Assembly are women so we have plenty of women there, we don’t need another party of any kind, we have enough parties, we just need the people voted to Stormont to do their job.”

Baroness Blood said Minister for Foreign Affairs Simon Coveney and Northern Secretary James Brokenshire were doing a good job but she was pessimistic about a deal being reached. “Until the two major parties (Sinn Féin and the DUP) realise they are there to represent people, not themselves, I don’t think they will get anywhere,” she said.