There were people in Ireland too who would not endorse the leadership of the Taoiseach Leo Varadkar, SF president said 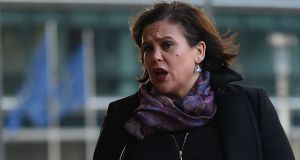 Speaking in Dublin on Saturday Sinn Féin president Mary Lou McDonald said many people would not endorse the leadership of Taoiseach Leo Varadkar on the basis of poverty that they may be suffering. File photograph: John Thys/AFP/Getty Images

The party has been heavily criticised for sending MLA Conor Murphy and general secretary Dawn Doyle to the event as Mr Maduro’s re-election has been denounced at home and abroad.

Ms McDonald said that Mr Maduro had been “democratically elected”and noted there were people in Ireland too who would not endorse the leadership of the Taoiseach Leo Varadkar.

On Thursday Niall Collins, Fianna Fáil’s foreign affairs spokesman, said Sinn Féin’s presence at the inauguration was “just another example” of why the party is “unfit for government”.

The vast majority of the opposition in Venezuela boycotted last year’s vote on the grounds that it was rigged in favour of Mr Maduro, noting a host of irregularities, including Socialist Party activists offering monetary payments to voters.

However, he continues to enjoy support from the armed forces, leaving him with few serious challenges at home despite the international outcry.

Speaking in Dublin on Saturday Ms McDonald said, “Yes, we had representatives in Venezuela for the inauguration of the democratically elected president. Politics increasingly is reflective of the fact that we live in a global village. We were there as part of a delegation, we were there because we were invited and I’m very glad that two Sinn Féin representatives were in attendance.

“So it’s not for us to be endorsing or otherwise, we have our political work to do here. We present ourselves for election here to the people of Ireland,” she added.

Mr Maduro replaced Hugo Chavez after his death in 2013 and won a six-year term last year despite hyperinflation, chronic food shortages and a severe economic contraction hitting the country. He blames an “economic war” led by the US and local opposition adversaries for the country’s woes.

Ms McDonald said many people would not endorse the leadership of Mr Varadkar on the basis of poverty that they may be suffering.

“You see there would be people who live in this country who would not endorse the leadership of Leo Varadkar on the basis that they endure poverty, some of them live in hotel rooms and many of them are only barely getting by on very low wages.

“I think we also have to acknowledge that he is the Taoiseach and so I think there is a distinction between what people legitimately within their democracies might say or a view that they might have around a political leadership.

“There’s a distinction between that and saying well that’s not legitimate,” she said.

“We believe that the Venezuelan election was open and democratic and the president has been elected. Let me tell you this, it is for the people of Venezuela and for them alone to decide who their president is and who leads them and that’s our position. It’s the only democratic position you can have.”

Ms McDonald said she was comparing Mr Varadkar and Mr Manduro “only in as much as elections and the selection of leaders and governments are for the population of the country concerned.”

“So for us, you know, we decide and people go to the polls and they make their democratic selection and that’s as it should be across the world. That’s the only point I’m making.

“I was answering the point of people having internal critics and experiencing poverty on the watch of any particular leader and I was simply making the point which I think is a truthful point that here in this democracy equally you would have people who are very critical of the government on the basis that they are experiencing poverty and that they are having a hard time.”

Meanwhile Ms McDonald said she was “very concerned” at any suggestion that the fire at a disused hotel in Rooskey on the Leitrim-Roscommon border which was to open as a centre for asylum seekers had been started deliberately.

“There was somebody in the hotel at the time. I understand that if fire had started later into the night that there could have been a very very tragic outcome,” she said.

“It concerns me also any suggestion that people would act in a hostile manner in respect of new people, refugees coming to a community, and I say that very mindful of the fact that very often the State and the system can create some of these tensions within communities by not, you know, going down and talking to and collaborating with people who live in Rooskey or elsewhere.

“There’s a way in a very, very compassionate and a very decent and a very friendly way that’s true to our Irish temperament to deal with these issues and to make a welcome to people who are vulnerable but it has to be done in a way in which communities feel included. That they don’t feel that they’re left on the outside and that no bad feeling is allowed to brew, but I await the investigation.”