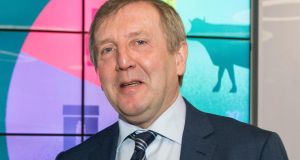 Michael Creed: Government would seek hundreds of millions of euro in financial aid from Brussels if the UK crashes out. Photograph: Colm Mahady / Fennells

Irish beef farmers are facing a “potential Armageddon” from Brexit and will need substantial EU compensation for losses, the Irish Farmers’ Association has said.

The beef farming sector is one of the most exposed to a no-deal Brexit; the UK market accounts for half of all exports by Irish beef producers.

Minister for Agriculture Michael Creed has said the Government would seek hundreds of millions of euro in financial aid from Brussels if the UK crashes out of the EU without a deal on March 29th.

The IFA has calculated that the EU would have to pay compensation amounting to €20 per head of cattle for every five cent reduction per kilo in the cattle price on every animal slaughtered.

This could amount to more than €500 million in financial support required based on an estimated potential reduction in beef prices by one of the country’s largest meat processors as a result of tariffs that would be introduced in a hard Brexit, and on the IFA’s calculation on the impact on prices.

“Minister Creed needs to put on the green jersey and tog out, right now, for Irish farmers who are facing a potential Armageddon for Brexit,” said IFA president Joe Healy.

Co Meath-based Kepak estimated that the industry could face average price reductions of up to 25 per cent as a result of World Trade Organisation tariffs in the event of a no-deal scenario.

Kepak managing director John Horgan told The Irish Times that “significant market support measures” would be required from the EU in the absence of a transition period to avoid tariffs.

He estimated WTO tariffs of €560 million on average on the 250,000 tonnes of beef exported to the UK.

The IFA said farmers were already nursing major, unsustainable losses from Brexit-related losses as prices were 25 cent per kilo or €90 per head of cattle lower than this time last year.

He said Mr Creed needs to “get out to Brussels” and make clear to Ireland’s EU agricultural commissioner Phil Hogan and the commission that “Irish beef farmers cannot be the ones to carry the cost of Brexit losses.”

Eating out in Dublin – the homeless way 01:40
School closures over strike set to be greater than anticipated 01:00
Fianna Fáil candidate served as director despite court order 00:54
FG and FF back transition payment for persons retiring before to right to State pension 00:10
Lobby to press politicians over referendum on right to home 00:05
SUBSCRIBER ONLY