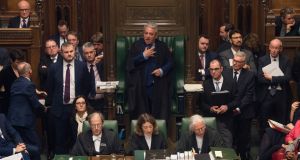 A vacuum created by the lack of authority now characteristic of Theresa May and Jeremy Corbyn is being filled by coalitions of MPs, who this week demonstrated that the House of Commons is committed to block a no-deal Brexit. Photograph: UK Parliament/Mark Duffy/PA Wire.

The result of the House of Commons vote on the EU-UK withdrawal agreement, scheduled to take place on Tuesday, will be a signpost to the trajectory of the next, crucial phase of the Brexit process which culminates on the eve of Brexit day itself, March 29th.

At present Theresa May appears on course for a heavy defeat, possibly by well in excess of a 100-vote margin. However, the picture is complicated by the possibility of amendments being voted on beforehand, which could change the complexion of the question facing MPs.

The situation is so fluid at Westminster that nobody can say with any confidence what the likely outcome will be on Tuesday evening. It’s likely that the votes of many MPs have not yet been decided and that the vote itself could even be postponed again.

Two things are clear, though.

First, Mrs May cannot win a vote on the treaty at present. Second, whatever happens on Tuesday, she will try to keep the deal with the EU alive.

While the European Commission will issue some clarifications about the agreement – and the role of the backstop – on Monday, nobody expects it to be sufficient to change the minds of the DUP or many Conservatives. Mrs May will inevitably return to Brussels to seek further clarifications, assurances or concessions to enable her to pass the treaty.

Irish officials say that Dublin has no real role in the process and – like everyone else, they are waiting to see what happens in Westminster.

There is a belief – though not as optimistic as Simon Coveney’s public pronouncements – that Mrs May could carry the treaty through parliament. There is also a realisation that the focus on the backstop after Tuesday will inevitably drag Ireland into the frame.

The EU has signalled repeatedly that it wants to help Mrs May pass the treaty. But it has also said the text of it cannot be reopened. Monday’s statement from the commission is likely to refer to a strong desire not to use the backstop at all, and to negotiate a deep future relationship with the UK as soon as possible.

If the backstop does kick in, the EU will stress that it should only be temporary. But nobody thinks that will be enough to change the mood at Westminster.

Taking the Tory refusniks and the DUP at face value, only something that is legally binding will do that. Previously, Ireland sought and received the addition of protocols to EU treaties regarding abortion and neutrality to ease their passage in referendums here. But essentially they said that things that weren’t in the treaties, weren’t in the treaties.

The EU, as an organisation, is disposed towards compromise. It will want a deal. That has obvious implications for Ireland. In Dublin, in private conversations, some sources say two things about this: there is no pressure yet. But it may come.

It might not come to that. Irish sources – and Dublin receives daily updates from the embassy in London, which has a deep and wide information-gathering network in Westminster and beyond – also say the landscape is shifting in the Commons.

What is emerging, Dublin reckons, is that the vacuum created by the lack of authority now characteristic of Mrs May and Labour leader Jeremy Corbyn is being filled by coalitions of MPs.

This week, one such coalition demonstrated that parliament is committed to block a no-deal outcome. But how it would block it, or by what means, or what it would replace that outcome with, is utterly uncertain.

5:18 Róisín Ingle: The gin is now part of my daily routine