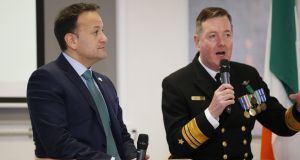 Taoiseach Leo Varadkar has said Irish involvement in peacekeeping and military operations abroad forms a huge part of his ambition for the State to double its global footprint over the next decade.

Mr Varadkar was speaking in Mali on Sunday night during the first day of a week-long visit to Africa.

He met the 20-strong contingent of personnel from the Irish Defence Forces who are serving in the vast West Africa country, which has been beset by factional conflict, and by Islamist extremism, over the past decade. It is the first visit by a serving Taoiseach to Africa for some 11 years.

“When you think of a lot of the problems we face [in Ireland and in Europe], there is a global dimension to them: illegal migration, climate change, security threats from terrorists, economic movements like changes in trade policy and what happens in the bond market and currency,” he said.

He added: “We set an ambition to double our global impact and our footprint around the world by 2025. A huge part of it is our military and peacekeeping operations around the world, [including] here where [Irish troops] are part of the EU training mission, helping to train the Mali defence forces and helping the Malian government take back control of the country.”

Mr Varadkar said the global impact of Ireland would also be evident on the second leg of his trip to Ethiopia, where Ireland has a major international development programme.

The Defence Forces are involved in training local personnel in Mali in areas such as international humanitarian law, training to counter improvised explosive devices, and military operations in urban terrain.

While the conflict in northern Mali has ended, the country still suffers from violence and insecurity with attacks from Islamist forces and between ethnic groups. The conflict has left almost 150,000 people displaced outside the country, and has caused malnutrition and developmental delays in children.

Lieut Col John Prendergast, the most senior Irish officer based in Mali, said that what mattered in the country was also important to Europe.

The view was echoed by the Defence Forces chief of staff Vice-Admiral Mark Mellett, who is also on the visit to Mali.

Addressing the soldiers, Mr Varadkar said what the Defence Forces do in missions such as the one in Mali was “an essential expression of what the Army is all about”.

“It helps to give us status in the world and also goodwill and an open ear,” he said. “From our point of view it is difficult to be away from your families for such a long time. It is something that the Irish people recognise as of real value. We as a Government recognise it as [being] of enormous value.”