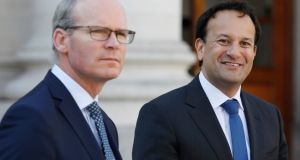 The “End of Varadkar” was how the Daily Express reported the news of a programme for government deal reached between Fine Gael, Fianna Fáil and the Green Party on Monday.

“Irish PM removed in coalition deal after YEARS of Brexit meddling” read a headline on the pro-Brexit British newspaper’s website, which described Taoiseach Leo Varadkar as a figure who had previously “sparked fury over his Brexit interventions”.

The programme for government deal was agreed between the leaders of the three parties, and must now be ratified by the party memberships.

Fianna Fáil leader Micheál Martin is to become the next taoiseach under an agreement to rotate the position as part of the deal, with Mr Varadkar to resume the role in December 2022.

The Daily Express article stated the position of taoiseach would be rotated and held by Mr Martin until the end of 2022, without outlining that at that stage Mr Varadkar would again become taoiseach.

The Financial Times reported the coalition deal as one that if approved “would shatter a system that has survived for almost a century” in Irish politics.

“All governments since the foundation of the Irish State in 1922 have been led by Fianna Fáil or Fine Gael and its predecessor. But the parties, which took opposing sides in the 1922-23 Civil War over the terms of the treaty to establish independence from Britain, have never ruled together,” the article stated.

The Guardian reported that the proposed programme for government would “inject urgency into Ireland’s response to the climate crisis”.

The British outlet reported that some analysts had suggested the deal would suit Sinn Féin, as the party “can consolidate as the official, mainstream opposition and avoid blame in the looming economic reckoning”.

The Associated Press, a news wire agency supplying content to media organisations around the globe, reported that the Republic’s two “long-dominant rival political parties” had agreed a government deal “four months after an election that shook the country’s political landscape”.

The wire report described Fine Gael and Fianna Fáil as “bitter rivals whose roots lie in opposing sides of the Civil War that followed Ireland’s independence from the United Kingdom”.

The agency said the two parties had “long shunned Sinn Féin because of its historic links to the Irish Republican Army and decades of violence in Northern Ireland”.