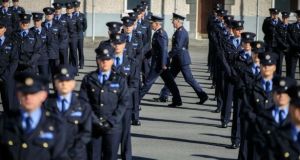 A new unit will be established in the Department of Taoiseach “to work towards a consensus on a shared island.”

“This unit will examine the political, social, economic and cultural considerations underpinning a future in which all traditions are mutually respected.”

The parties also plan to work with the Executive and the UK Government to “deepen multi-agency cross-border co-operation on crime, including information sharing between the Police Service of Northern Ireland and An Garda Síochána.”

They will also seek to develop an all-island strategy to tackle climate breakdown and the biodiversity crisis.

The document also says the new government will work with the Northern Ireland Executive to deliver key cross-border infrastructure initiatives, including the A5, the Ulster Canal connection from Clones to Upper Lough Erne, the Narrow Water Bridge, and cross-border greenways, in particular the Sligo-Enniskillen greenway

They will also “ensure the Decade of Centenaries is marked in an inclusive, appropriate and sensitive manner.”

The parties will engage with the British Government with a view to ensuring access by “an independent, international judicial figure” to all original documents relating to the Dublin and Monaghan Bombings, as well as the Dublin bombings of 1972 and 1971, the bombing of Kay’s Tavern and the murder of Seamus Ludlow – in accordance with the all-party Dáil motions on these matters.

On policing, the draft programme for government commits to continue recruitment to An Garda Síochána, promote more community policing, relieve gardaí from non-core duties and encourage more diversity within the force.

There is also a pledge to extend powers for use of CCTV and and automated number plate recognition to help prevent crime.

The Dublin North-East Inner City model to tackle crime and address disadvantage will be extended to other areas.

There is a promise also to bolster powers against white-collar crime including amending legislation to ensure prosecutions happen more quickly.

Legislation will be published on family courts designed to have a less adversarial court to family law cases. That will include a new family law court building. There is also a commitment to establish a new planning and environmental law court.

A gambling regulator is also being established within the lifetime of the government, a body that has been promised for many successive governments.

Hate crime will also be legislated for with specific offences to ensure those who target victims over identity will be prosecuted for hate crime. The Incitement to Hatred Act 1989 will also be updated.

The programme notes there is an epidemic of domestic, sexual and gender-based violence in Ireland and commits to an audit within nine months to see how Government Departments individually, and as a whole, deal with these crimes.

Under the heading of public life, the parties pledge to hold a number of plebiscites and to pass legislation to allow the first directly elected mayor in Limerick to be elected in 2021.

It will allow for plebiscites to be held in 2024 in any local authority that wishes to have a directly elected mayor.

Next year it will establish a Citizens’ Assembly to consider the type of directly elected mayor and local government structures best suited for Dublin.

On media it will “bring together all policy functions relating to broadcast media, print media and online media into a single media division within a government department”.

It will also “review and reform defamation laws to ensure a balanced approach to the right to freedom of expression, the right to protection of good name and reputation, and the right of access to justice”

It will establish a future of media commission to consider the future of print, broadcast and online media and to report within nine months.