Programme for government: ‘Living wage’ to be promoted

Social protection spending: ‘Safety net’ to be created as pandemic benefit is phased out 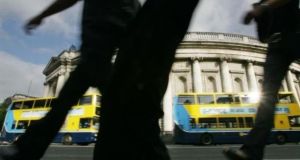 The new Government has undertaken to provide a “safety net” to those most severely impacted by Covid-19 as the special unemployment payments and income protection payments come to an end.

There is a commitment to protect social welfare rates in addition to other benefits which vulnerable groups are currently entitled to.

There is also a promise to progress to a living wage over the lifetime of the government, although there are no details on what figure that might be.

In terms of pensions - one of the big sticking points of negotiations - those who each the retirement age of 65 will no longer have to sign on and be actively seeking work.

Free travel will remain for those aged 66 and over.

In addition, a new auto-enrolment scheme will be introduced for pensions, to encourage more people to have a separate pension scheme to the State pension.

This will be an opt-out scheme and will be phased in over a decade.

A Low Pay Commission is also being retained to determine the appropriate level for the minimum wage. The commission will also look at another Green ask, that of introducing Universal Basic Income.

In the area of equality, there is a commitment to give long-term undocumented immigrants a pathway to regularise the status. This will happen within 18 months of the formation of the Government.

On direct provision the document commits to ensure a move away from the current centres to “accommodation for asylum seekers that has the protection and promotion of human rights at its core”.

The new system will be not-for-profit and an expert group will produce recommendations for how it will work by the end of this year. In the meantime, the Government will work to improve conditions for those currently in the system.

LGBT1+ policy will include legislation to allow adoptive leave and benefit for same-sex male couples, a ban on conversion therapy, and the expunging of criminal records for gay men convicted of historical offences.

Those aged 16 and 17 will not longer have to acquire two specialist reports to apply for gender recognition.

On disability, there is a promise to prioritise early diagnosis interventions, an awareness-campaign, with a special emphasis in the short term on helping those who were most impacted by Covid-19.

The programme recognises that cost of, and access to, childcare remains a problem. The three parties promise to reduce the cost of childcare for parents. In terms of Covid-19, there will be cost reductions for parents through the National Childcare Scheme.

Parental leave will be extended to allow parents have more time with the child in the first year. There is also a pledge to increase remote working, more flexible hours and hub working arrangements to support families.