In a speech at the Democratic Unionist Party conference in Belfast, former UK foreign secretary Boris Johnson said that the Brexit draft deal was a mistake. Video: DUP 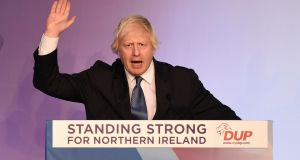 The United Kingdom is “on the verge of making a historic mistake” if it votes through the draft Brexit agreement, former British foreign secretary Boris Johnson has said.

In a hard-hitting speech to the Democratic Unionist Party conference in Belfast, the pro-Brexit MP warned that the proposed divorce deal, still to be voted on by the UK parliament, would leave the UK “a satellite state” and separate out Northern Ireland, leaving it “an economic semi-colony of the EU.”

“Unless we junk this backstop, we are going to find that Brussels has got us exactly where they want us: a satellite state,” Mr Johnson told several hundred DUP members gathered in south Belfast.

The former London mayor, who resigned from Theresa May’s UK cabinet over her Brexit strategy, said that if the UK was “not careful,” it could end up staying in the EU customs union and single market.

Britain would, under the terms of the proposal Brexit agreement, be “rules takers” from Brussels, he said, and unable to agree “free trade deals of any value or significance.”

Mr Johnson accused the EU of playing a “very clever trick” on the UK in drafting the Brexit agreement.

“They have made Northern Ireland their indispensable bargaining chip in the future negotiations,” he said.

He said that in the withdrawal agreement the birth of a new nation can be witnessed called “UK-NI” which he pronounced “Uckny.”

This would be a country “no longer exclusively ruled by London or Stormont, ” Northern Ireland’s local parliament, but “in large part to be ruled by Brussels,” he said.

Drawing on Belfast’s shipbuilding history and the most famous vessel it built to describe what the UK was facing under the draft deal, Mr Johnson said: “The Titanic springs to mind.”

“Now is the time to point out the iceberg ahead because these obligations won’t just apply to current EU regulations but anything that Brussels devises in the future,” he said.

The UK was faced with a “Hobson’s choice”, he said: if it wanted to agree free trade deals, cut tariffs or vary regulations, it would have to leave Northern Ireland behind as an “economic semi-colony of the EU.”

This would mean “damaging the fabric” of the UK with regulatory checks and customs controls between Britain and Northern Ireland on top of additional regulatory checks down the Irish Sea in the divorce treaty.

“No British Conservative government could or should sign up to any such arrangement,” he said, to applause from the DUP members.

“And so our answer at the moment is rather desperately to make sure the whole UK stays in the backstop, with the EU having the power to decide whether or when we can ever leave,” he said.

He warned that under the agreement, the EU could demand more in the coming negotiations on the future relationship with the UK to break free from the backstop. These might include a special deal on immigration or an acceptance of EU legislation on services, goods and agri-foods.

“This deal risks yet further economic and political humiliation,” he said. “We are locking ourselves by treaty and making it impossible to negotiate our way out in the second half of the talks,” he said.

“This is not what we voted for.”

Speaking to an audience that included DUP leader Arlene Foster and deputy leader Nigel Dodds, Mr Johnson said it was “absolutely vital” that the Conservative Party and the DUP continue the confidence and supply arrangement under which the Northern Irish party is keeping the Tories in power.

“We should work together to ensure that the whole UK, Northern Ireland included, can seize the opportunities of Brexit,” he said.

Mr Johnson repeated his views that “technical solutions do exist” that can prevent a hard border on the island of Ireland and said the UK should withhold at least half of the £39 billion pound divorce bill from the EU until a free-trade agreement is concluded at the end of 2020.

In a characteristically idiosyncratic and free-wheeling speech that touched on everything from Stars Wars and light sabres to James Bond and Belfast singer Van Morrison, Mr Johnson sought to rally the DUP faithful with a vision of the UK as a global champion of free trade.

The British MP’s at-times combative address played to his Unionist audience from the outset. He pointed out that he beat Labour incumbent Ken Livingstone to become mayor of London in 2008, removing from office “the left-wing IRA-sympathising, united Ireland-promoting semi-Marxist.”

He criticised the economic policies of UK Labour leader Jeremy Corbyn whom, he said, “has not only campaigned for a united Ireland but, to the best of my knowledge, has failed to condemn the terrorist atrocities of the IRA.”

Striking strongly economic nationalistic notes in his speech, Mr Johnson held up Northern Irish bus manufacturer Wrightbus, as an example of a UK company exporting across the world, to the delight of his Northern Irish audience.

He described the company’s bus, which he commissioned for London’s streets when he was mayor, as “the United Kingdom on wheels.”

“Whenever you see one of these noble elephant-browed beasts you are looking into Northern Ireland in London,” he said.