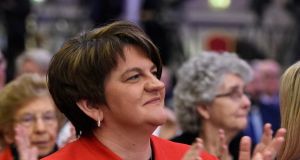 DUP leader Arlene Foster when delivering her keynote speech at her party’s annual conference rejected the British government “spin” that the only choice is between the withdrawal agreement or no deal.

Ms Foster in her address at the Crowne Plaza Hotel in Belfast on Saturday also apologised for the botched Renewable Heat Incentive scheme.

In her speech to some 600 delegates she held firm to the party line that the DUP could and would not tolerate the EU-UK withdrawal agreement.

It was however the nature of her apology over the RHI scheme, which has become known as ‘cash for ash’, that ultimately could cost the Northern Ireland taxpayer up to half a billion pounds that was most striking about her speech.

On RHI Ms Foster said her motivation always was to do the right thing. “Some of our past decisions and actions have left a lot to be desired and I know that they have personally hurt and offended many of our members, voters and the public,” she said.

In her speech she also appeared to anticipate a hugely critical report by Judge Patrick Coghlin when the findings of his inquiry into RHI are published next year.

“The public inquiry has been difficult for many individually and painful for the party collectively. No party would want to have all of its dealings exposed for all to see at a public inquiry, especially in the unique system of government we have, with the struggles and strains required to make it work,” she said.

“But I make no excuses,” she added. “Today as leader of the party I apologise. As a party we are deeply, deeply sorry for the mistakes we made and for the things we got wrong during that period. I am determined our party will learn the lessons from RHI and how government business was conducted at Stormont more generally.”

Ms Foster also referred to the criticisms of some of the DUP special advisers over RHI. “We will work hard to make amends and regain the support and trust of those who were upset by what they saw unfolding over the last number of months,” she said.

The DUP also implicitly adverted to how the House of Commons suspended Ian Paisley over taking family holidays in Sri Lanka from the Sri Lankan government. “I know I speak for many when I say that over the course of the last twelve months there have been a number of other areas where behaviour in our ranks has not matched the standards expected of people holding public office,” she said.

“We must ensure there is no repeat of such behaviour and that those high standards we aspire to ourselves, and that others rightly require of us, are applicable at every level within this party,” she added.

Ms Foster strongly reiterated DUP rejection of the EU-UK Brexit withdrawal agreement. “This party wants to see a negotiated and orderly withdrawal from the European Union, that has always been our position,” she said.

“We are not campaigning for a no deal exit nor do we want barriers to trade between Northern Ireland and our neighbours in the Republic. The choice is not between this deal and no deal despite what the government spin machine may say,” she added.

“The reality is that if we are to secure a better outcome than is currently on offer then the only option is to look beyond this current draft withdrawal agreement and work in the time ahead for an improved outcome.”

In reference to how a broad range of business interests in Northern Ireland support the withdrawal deal Ms Foster said she understood how they wanted certainty over Brexit. “But for us we cannot wish away the fact that the draft withdrawal agreement contains arrangements that we believe are not in Northern Ireland’s long term economic or strategic interests,” she said.

“In addition to the economic arguments we believe the constitutional implications of the deal cannot be ignored,” she added.

Ms Foster said the DUP was a pro-devolution party and had a priority to restore the Northern Executive and Assembly. “I am as committed to devolution today, as I was the day the institutions stopped functioning,” she said.

Ms Foster said the DUP would step up its engagement with Northern Secretary Karen Bradley and the other parties to “chart a way forward” to restore Stormont.

The last attempt to strike a deal between the DUP and Sinn Féin largely broke down over the DUP’s inability to sell the idea of Irish language legislation to its constituency.

While her predecessor as First Minister and DUP leader Peter Robinson this week said that he “could not care less” about an Irish language act being introduced Ms Foster made no direct reference to the Irish language.

She referred more generally to culture. “We must be conscious that there is a lack of cultural security primarily for unionists but also for others. We need a new cultural deal for everyone in Northern Ireland that respects difference and fosters understanding,” she said.

“It is in unionism’s interests for those from all backgrounds to feel comfortable in a Northern Ireland at peace with itself. The result will be a Northern Ireland with effective functioning devolved government, making a tangible difference to people’s lives,” said Ms Foster.