Efforts to amend abortion legislation to be redoubled 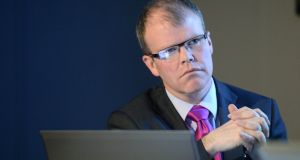 Peadar Tóibín, TD wants the woman to be told the probable anatomical and physiological characteristics of the foetus. Photograph: Dara Mac Dónaill

Anti-abortion and pro-choice TDs are set to redouble their efforts to amend abortion legislation when it comes back before the Dáil this week.

A total of 65 amendments have been submitted by TDs from a variety of parties to the Health (Regulation of Termination of Pregnancy) Bill, which will legalise abortion following the referendum on the constitutional amendment in May.

Many of the previously suggested amendments at committee stage will be discussed again.

Minister for Health Simon Harris will introduce a new amendment which will make it clear that student nurses are covered by the proposed legislation.

Deputy Peadar Tóibín, who resigned from Sinn Féin earlier this month over his opposition to abortion, will seek to change the Bill so that certain information can be offered to a woman before she can access a termination. In a softening of his previous stance, he is proposing that the woman can decline the offer of this information.

He will ask that, except in the case of immediate risk to the life of a pregnant woman where a termination is required, no abortion would be carried out without the offer of this information to the woman.

This would include information on the immediate and long-term medical risks associated with the proposed termination of pregnancy method, and alternatives to abortion. He also wants the woman to be told the probable anatomical and physiological characteristics of the foetus at the time the abortion is to be performed.

He will seek to amend the Bill so that in cases where a foetus is of 20 weeks’ gestation or more, the medical practitioner will offer information on foetal pain to the pregnant woman.

Mr Tóibín previously said that he and other anti-abortion TDs were seeking to speak for “the 34 per cent who voted against the referendum and the 20 per cent of Yes voters who voted only for the difficult cases and not for abortion on request”.

Fianna Fáil has submitted an amendment which would ensure that student doctors, nurses and midwives are subjected to the new law, which has now been clarified by Mr Harris.

The Government last week agreed to a number of changes to the proposed legislation. Cabinet agreed an amendment which would mean that if the original medical practitioner looking after the woman seeking an abortion becomes unavailable, a second practitioner will be able to step in.

This would drop the requirement that the doctor who certifies a woman for an abortion must be the same one who performs it.